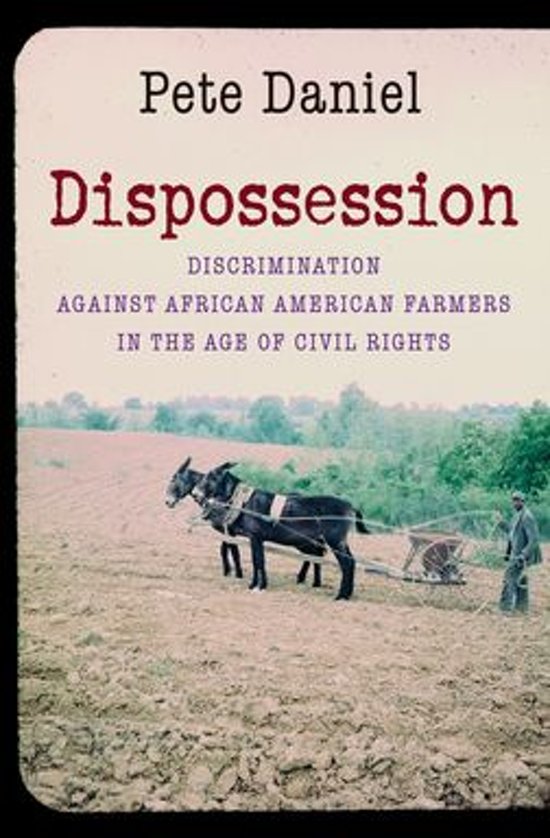 Between 1940 and 1974, the number of African American farmers fell from 681,790 to just 45,594--a drop of 93 per cent. In his hard-hitting book, historian Pete Daniel analyses this decline and chronicles black farmers' fierce struggles to remain on the land in the face of discrimination by bureaucrats in the U.S. Department of Agriculture. He exposes the shameful fact that at the very moment civil rights laws promised to end discrimination, hundreds of thousands of black farmers lost their hold on the land as they were denied loans, information, and access to the programs essential to survival in a capital-intensive farm structure.More than a matter of neglect of these farmers and their rights, this passive nullification consisted of a blizzard of bureaucratic obfuscation, blatant acts of discrimination and cronyism, violence, and intimidation. Dispossession recovers a lost chapter of the black experience in the American South, presenting a counter-narrative to the conventional story of the progress achieved by the civil rights movement.
Toon meer Toon minder

Daniel's rich description of the people and processes that blocked black farmers' access to the resources they needed to stay on the land is an essential guide for scholars seeking to understand post-1960s developments and persistent racial inequality in the twenty-first century.--Journal of Southern History Daniel's Dispossession is provocative, beautifully crafted, and a fitting continuation of his tremendous contribution to our understanding of the fundamental changes in the United States' agricultural systems during the twentieth century.--Journal of American History Likely to stimulate renewed scholarly interest in 20th-century agricultural history, this fine book belongs in every academic library. Highly recommended. All levels/libraries.--Choice Daniel tells a fascinating, in many ways surprising, but completely infuriating story. His archival research is creative and impeccable.--Law and History Review Well-written and impeccably researched . . . [and] an invaluable and welcomed addition to the ever-expanding landscape of Civil Rights historiography.--Journal of the North Carolina Association of Historians Southern farmers struggled to keep up with changes in technology and policy, economics and politics, labor relations and out-migration. African American farmers bore the additional burden of crippling discrimination. . . . With customary passion, Pete Daniel methodically demonstrates that the USDA bears much of the blame. Dispossession catalogs decades of locally administered and federally sanctioned racism that permeated this powerful government agency's activities within the South.--North Carolina Historical Review This thoroughly researched and clearly written account of USDA discrimination against black farmers merits reading by anyone interested in agricultural and southern history.--American Historical Review Soberingly revealing the dark underside of an era hailed for black success against racism, Daniel's work exposes sickening, irreparable, racist destruction that compels reconception of popular memories of a generation of civil rights victories. This book belongs in any serious collection on U.S. civil rights, federal farm policy, or 20th-century America.--Library Journal Read Dispossession. It's a riveting and timely account of the deleterious legacy of slavery. And despite the national interest in civil rights, not much competes with Dispossession.--Huffington Post An essential contribution to the rural history of the civil rights movement and to the growing history of black farm ownership.--Register of the Kentucky Historical Society The critical exposure of discrimination at all levels of government is both informative and provocative and is a welcome addition to the historiographical conversation.--H-1960s
Toon meer Toon minder