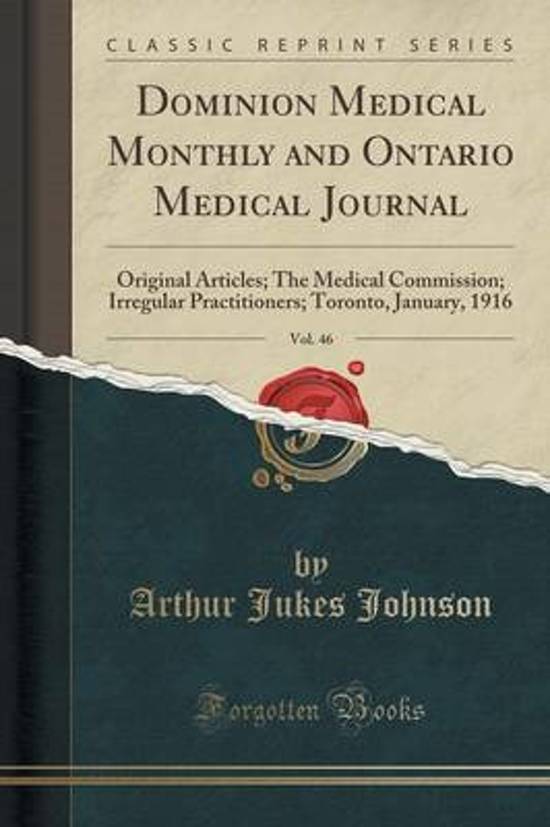 Excerpt from Dominion Medical Monthly and Ontario Medical Journal, Vol. 46: Original Articles; The Medical Commission; Irregular Practitioners; Toronto, January, 1916
As soon as another attack, accompanied by the more marked symptoms of insanity, occurs, this patient either escapes, or commits suicide, or gets into some other place of the same kind to repeat the same process.
A number of these cases have come under my notice. In some inquests have been held, in others a certificate of death has been secured from a regular practitioner, either through misrepresentation or by some other method equally disgraceful.
When an attempt is made to inquire into one of these cases the result generally seems to be that the coroner's jury are inclined to think that the deceased had already been treated in an asylum, and had not improved, and that the irregular practitioner had almost succeeded in doing something, which, however, he failed to accomplish, and that under any circumstances a broken-down, more or less decrepit, semi-insane person could easily be spared.
Two cases at present in hospital in the city of Toronto will illustrate the danger of treatment by irregular practitioners. One is the case of a gentleman who contracted a disease without his knowledge, which when properly treated can be cured absolutely. This man tells me that he has been under the hands of a large number of regular and irregular practitioners. That the suggestion of three years of constant treatment which the regular practitioner told him would be absolutely necessary for him to observe to enable him to be made perfectly well was too old-fashioned and slow. He therefore tried various irregular practitioners. They all promised him that he would walk again, quite well, in a short time, and be able to attend to his business. He grew steadily worse, and is now under the care of one of this committee. This poor man will probably never recover completely, but he will improve. It is too late now to accomplish more.
Another case is that of a young girl who for many weeks has been under the treatment of an irregular practitioner in the city of Toronto. She paid a large sum of money at regular intervals for this treatment. She has always been assured that she has nothing the matter with her but what could be made well, and she has now drifted into hospital a veritable wreck, with a form of disease that is absolutely incurable, as far as science knows.
About the Publisher
Forgotten Books publishes hundreds of thousands of rare and classic books. Find more at www.forgottenbooks.com
This book is a reproduction of an important historical work. Forgotten Books uses state-of-the-art technology to digitally reconstruct the work, preserving the original format whilst repairing imperfections present in the aged copy. In rare cases, an imperfection in the original, such as a blemish or missing page, may be replicated in our edition. We do, however, repair the vast majority of imperfections successfully; any imperfections that remain are intentionally left to preserve the state of such historical works.
Toon meer Toon minder