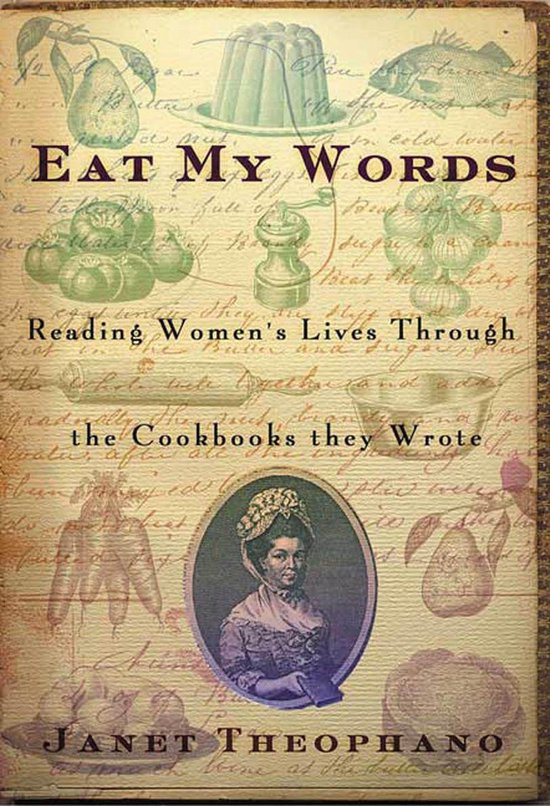 Some people think that a cookbook is just a collection of recipes for dishes that feed the body. In Eat My Words: Reading Women's Lives through the Cookbooks They Wrote, Janet Theophano shows that cookbooks provide food for the mind and the soul as well. Looking beyond the ingredients and instructions, she shows how women have used cookbooks to assert their individuality, develop their minds, and structure their lives. Beginning in the seventeenth century and moving up through the present day, Theophano reads between the lines of recipes for dandelion wine, ''Queen of Puddings,'' and half-pound cake to capture the stories and voices of these remarkable women.


The selection of books looked at is enticing and wide-ranging. Theophano begins with seventeenth-century English estate housekeeping books that served as both cookbooks and reading primers so that women could educate themselves during long hours in the kitchen. She looks at A Date with a Dish, a classic African American cookbook that reveals the roots of many traditional American dishes, and she brings to life a 1950s cookbook written specifically for Americans by a Chinese émigré and transcribed into English by her daughter. Finally, Theophano looks at the contemporary cookbooks of Lynne Rosetto Kaspar, Madeleine Kamman, and Alice Waters to illustrate the sophistication and political activism present in modern cookbook writing.


Janet Theophano harvests the rich history of cookbook writing to show how much more can be learned from a recipe than how to make a casserole, roast a chicken, or bake a cake. We discover that women's writings about food reveal--and revel in--the details of their lives, families, and the cultures they help to shape.

Subtitel
Reading Women's Lives Through the Cookbooks They Wrote