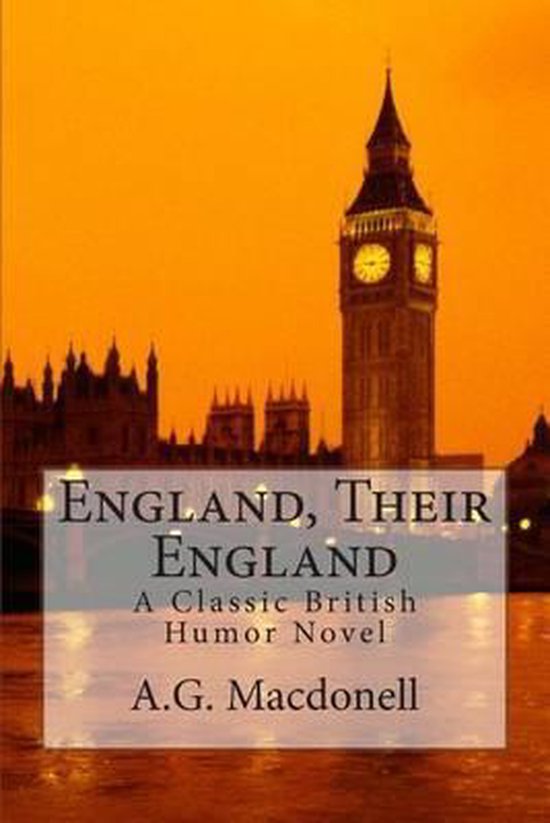 Amazon Review; ''England, Their England'' is set in an England of the 1920s. In almost autobiographical fashion, it chronicles the adventures of a young man, Donald Cameron, who is forced, under the terms of his father's will, to live his life south of the border amongst the 'alien and strange' English, rather than in his native Scotland. Whilst trying to make his way in London by means of various newspaper jobs, a chance encounter with a Welshman lands him with a commission to write a book about the English, as viewed through the eyes of a foreigner. Donald thus sets off on a quest to discover the true character of this alien land in which he finds himself forced to live: a Post (Great) War England of toffs and wags and provincial yokels, of gay young things, and of officers' and gentlemen's clubs; of weekend parties in the country (amidst the last dying embers of an earlier world). In his search for what it is that epitomises 'Englishness', Donald observes at close quarters the English engaging in numerous of their staple national pastimes: village cricket (probably the best known chapter of the book); walking the links; rugby football; fox hunting; boozing; international diplomacy and domestic politics. The book also contains an account of Donald's experience of what in those days was but a fledgling upstart clamouring for a place in English hearts and minds - an association football (soccer) match - as well as taking passing swipes at English inter-war literary and dramatic endeavours. This book's early chapters are outrageously hilarious, bordering on farce on occasions, although the mood turns more towards pathos in the later stages, as Donald discovers (and the author portrays the virtues of) the more down-to-earth, homespun existence of the newly emerging middle and working classes, although even here the author finds plenty of scope for caricature. The book turns briefly to total farce for its finale, in which all of the characters come together in one last ludicrous Act, before winding up with a peaceful (and rather sugary) coda on the history-steeped lawns of Winchester. The inter-war years were an odd period throughout the whole of Europe but perhaps nowhere more so than in Britain, and especially England, with the gradual collapse of its privileged classes - long in decline but by then all but wiped out in the carnage of the Great War (or else facing financial ruin in the depressions that followed). It is no real surprise that satirical novels were virtually the standard form of literary expression of those years; A G Macdonell's approach is wittier and less gloomy (yet more acerbic) than most of that time, especially the better known ones such as the writings of Evelyn Waugh (whose early novels are more or less contemporaneous with ''England, Their England''). Despite the passing of the years, this book acts as a perfect window onto its times; a window, nevertheless, fitted with distorting glass, intended to point up the ludicrous and the grotesque, encouraging no-one to mourn the passing of outmoded ways, or, indeed, the sad decline of a once great imperial power. And yet, speaking with a wit and humour that transmits itself as clearly and articulately today as when it was written, this book suggests that there is - and always will be - something of value at the heart of this indomitable (but fundamentally crazy) nation. Some of the jokes may have lost much of their meaning in the seventy years since this book was written (especially for younger readers unaware of the details of the history of those times) but ironically, many of the anachronisms so mockingly (and yet affectionately) painted in A G Macdonell's treasurable prose remain recognisably present in the England of today. ''England, Their England'' remains a classic book, and a great testimony to an observant and witty man whose untimely death in 1941 robbed the English-speaking world of a great mind and a fine author.
Toon meer Toon minder