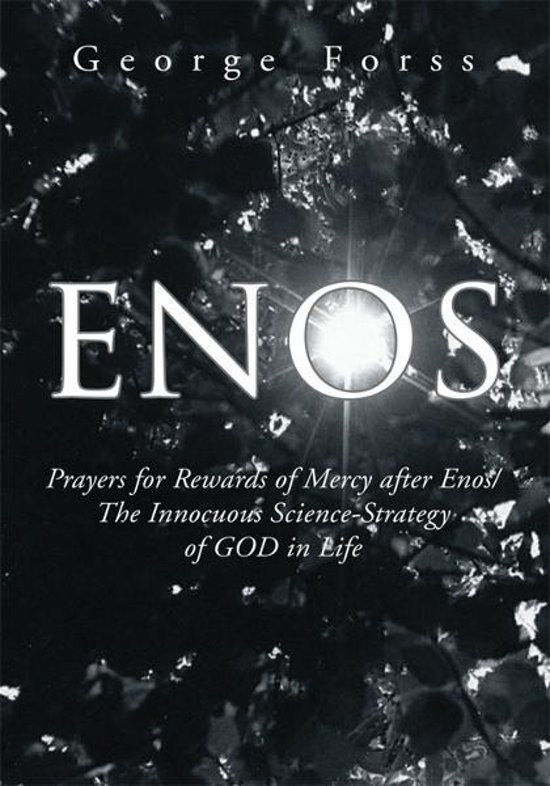 Enos is a biblical character. Enos is the grandson of Adam. In different bibles this name is spelled Enos, Enoch, and Enosh. It is said that Enos was the first human being to reach up to the heavens to pray to God for guidance. Enos, as far as science is concerned, would be the first early-on human being that paused one day suddenly to speak to God in the sky. This is so because somewhere in our past there would have to be a first person to do something like this. My book ENOS is my own prayerful quest to know the whole truth about humanity at long last. I do have it here. I believe I do because I asked for some guidance from God as did Enos.


I started writing my book in 1983 and it is based on a stark experience I had when I encountered some amazing wisdom in 1969. This experience made me want to know more about God in life. My quest is based on a book I read that a young woman named Buffy put together in 1969, which had the wisest words I have ever encountered. Buffy had what she called a report. She had a report that claimed to contain the real truth about humanity in the universe.


My book Enos is a similar phenomenal report about humanity and much more. My book is much the same as Buffys report because it is a recreation of what I saw in her report ... that, indeed, some Aliens did come to the earth in 1969 to create a new bible for our world ! There is a conversation that goes on for about 400 pages of my writing. In this way a new body of wisdom is born. My writing is about 700 pages in total. My book is not about my view of the universe revealing Gods might to us. My book is more like a prayerful quest because I am asking God in the universe for answers.


I know that I have the same basic wisdom contained in Buffys book.


My writing contains hundreds of new finding sentences. We know these as long standing wise sayings ... like ... He Who Lives by the Sword Will Die by the Sword. A few years after I met Buffy, from the day when she told me that some wise Aliens had abducted her and her friends, I ran into Buffy again. When I questioned her she said her report from those days was junk. She said ... You know how we were in those days, George. Her report wasnt junk to me and I had to have it back. Buffy didnt even know where her original report book was ! On this very occasion I made a vow to God and I started getting finding sentences immediately. These are transcribed all throughout my writing.


God always wins. In ENOS we learn that humanity is a part of God and part of some advanced Alien life form intelligence that came to the earth about 200,000 years ago. I am talking about the giants we read about in our basic Christian Bible in Genesis. This situation of a foreign intelligence cannot last long and when it is over only a Godly being will remain that suits this earth perfectly for a very long time. This foreign intelligence is humanity.


Enos is about God in the universe. Enos teaches us how to live freely for a million years. Enos is a new American style mindset [American lingo] about the wisdom that all natural creatures have known through the eons. The Aliens themselves in Enos are an amazing perfectly natural life form that has survived a long time in evolution to become who they are now ... who they want to be.


My book has to be known as a religion. This bold statement goes along with the process by which I have been able to write this book out at all. Enos is also an overly long diatribe of rhetorical writing that many will not like ... and some will be completely enthralled by. It can also be looked upon as being a book of poetry. Enos has about 50 poems in it, a few long poems and many short ones ... and many passages that are poetic like. The Aliens in my report say that this entire writing is a prolonged po