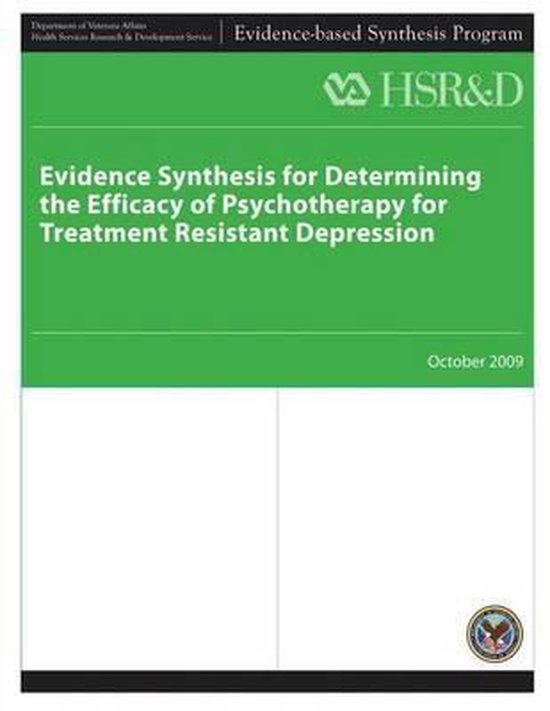 Major depressive disorder (MDD) is one of the leading causes of disability worldwide. The lifetime prevalence of MDD in the general population is estimated at 13%2, of which approximately 20% will experience chronic depression and 60-85% will experience recurrence and relapse. This number is even higher in the VA medical system, where an estimated one third of veterans experience MDD. MDD is associated with greater health care utilization, greater functional impairment, and increased mortality. In addition, subclinical symptoms of depression can reduce quality of life, worsen disability, and adversely affect co-existing chronic medical conditions. Both antidepressant medications and depression-specific psychotherapies are effective as first-line treatments for MDD. In primary care settings, most patients with MDD are treated with antidepressant medications, but a substantial proportion of patients fail to recover with this initial treatment. This evidence synthesis was requested to evaluate the efficacy of psychological treatments as step-2 treatment for patients with MDD who do not achieve remission with an initial course of antidepressant medication. Major depressive disorder (MDD) is a prevalent disorder impacting an estimated 13% of the general population, and a third of the veteran population. Of the patients who experience at least one depressive episode, approximately 20% will experience chronic depression and 60-85% will experience recurrence and relapse. Antidepressant medications are the most commonly prescribed treatment modality for MDD and are often the first line of treatment in primary care settings. However, fewer than 50% of patients fully remit after adequate dosage of antidepressant treatment. Treatment options for these “treatment resistant” patients vary but typically involve using other psychoactive medications as augmentation (i.e., addition of another medication) or substitution treatment (i.e., switching medications). Less attention has been paid to using psychotherapy as an augmentation or substitution treatment for treatment resistant patients, despite psychotherapy being associated with clinical improvements in MDD comparable to those achieved with antidepressants. The current review will address the effectiveness of psychotherapeutic approaches as a second step treatment for MDD in patients who do not achieve remission after initial treatment with antidepressants. Question: In primary care patients with major depressive disorder who do not achieve remission with acute phase antidepressant treatment, is empirically based psychotherapy used as an augmentation or substitution treatment more effective than control for achieving remission?
Toon meer Toon minder