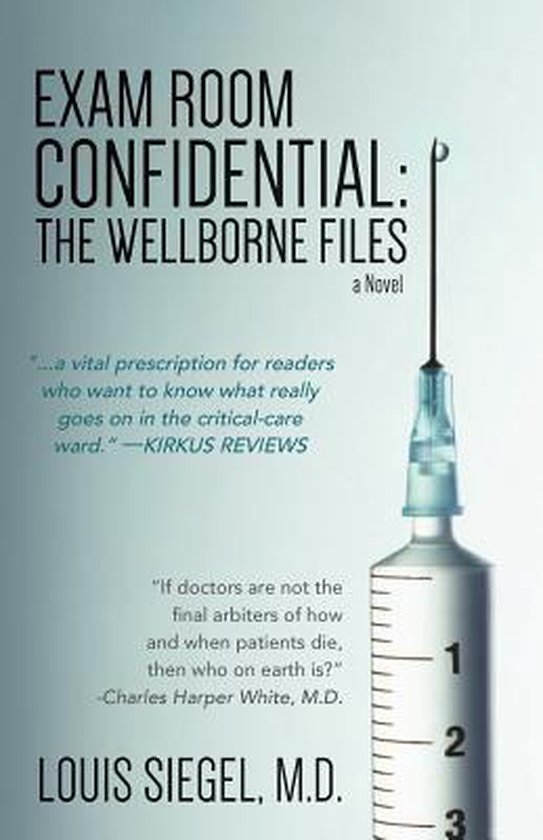 FICTION / MEDICAL / MYSTERY / EXPOSE’
''... A VITAL PRESCRIPTION FOR READERS WHO WANT TO KNOW WHAT REALLY GOES ON IN THE CRITICAL-CARE WARD.'' KIRKUS REVIEW, JANUARY 2015.
Charles Harper White, M.D. begins his career as an idealistic internist but soon finds his ethics and morals challenged by his patient family the Wellbornes and by medical colleagues lacking honesty, integrity, and humanity. The Wellbornes, riddled with medical and psychological complexity, begin to rule White’s life and strain his character.
Agnes Wellborne, in the ER and almost brain dead, is about to be snatched by the self-affected, patient-grabbing ICU director, Dr. Arnold Briteman, M.D., and, against her wishes and White’s orders put on unneeded and unwanted life support. If Briteman succeeds, White, in order to keep Agnes from a slow and painful death, and to keep his promise to Agnes that she would die with dignity if he had anything to say or do about it, will need to consider acts contrary to his sworn medical oaths.
Agnes’ seriously ill, but undiagnosed, sister Marion is either poisoning herself or, as Marion insists, the victim of her attorney brother Harris’ deadly determination to survive Agnes and Marion and win the inheritance left by the family patriarch to the last survivor of the three siblings. Read as White and his sleuthing attorney wife, Heather, turn detective to solve the mystery of who and what are killing Marion.
Unscrupulous and sloppy surgeon Alvin Litchfield. M.D. tells a Wellborne she has cancer, but does she? What truths lie buried in the pages of her medical chart that only a dedicated and meticulous doctor like White can uncover? Litchfield, and other of White’s colleagues like him, has been described as horrifying but one of the highlights of the book. What lessons can you learn from this book to save yourself from the deadly and reckless shenanigans of doctors like Litchfield and White’s other frightening colleagues?
The reader is constantly snapped in and out of unexpected medical complexities, physician dirty tricks, human compassion, professional wars, personal struggles, evil incarnate, and tender love.
This fictional account is a revealing and shocking inside look at the underbelly of medicine and one doctor’s life and the medical and social pathology he confronts. This book will make you think hard about the trust, faith, and respect you place in your doctors and the systems in which they work.
Through the use of the novel, the book explores physician aided death, end of life rights, gender issues, physician empowerment, and more.Includes a glossary, book club discussion topics, resources, and more.
Readers have said: ''A black book of fiction. I just hope medicine isn’t like this.''''A winning combination of humor and anger that is extraordinarily compelling.''''The doctors involved in this family's case are horrifying and one of the highlights of the book.''''Who among us doesn't like to read books about the ''inside story''
Toon meer Toon minder