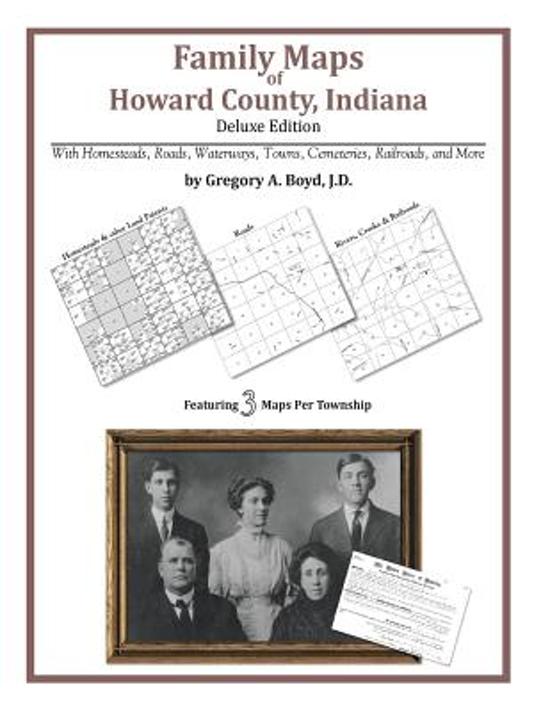 150 pages with 35 total maps Locating original landowners in maps has never been an easy task-until now. This volume in the Family Maps series contains newly created maps of original landowners (patent maps) in what is now Howard County, Indiana, gleaned from the indexes of the U.S. Bureau of Land Management. But it offers much more than that. For each township in the county, there are two additional maps accompanying the patent map: a road map and a map showing waterways, railroads, and both modern and many historical city-centers and cemeteries. Included are indexes to help you locate what you are looking for, whether you know a person's name, a last name, a place-name, or a cemetery. The combination of maps and indexes are designed to aid researchers of American history or genealogy to explore frontier neighborhoods, examine family migrations, locate hard-to-find cemeteries and towns, as well as locate land based on legal descriptions found in old documents or deeds. The patent-maps are essentially plat maps but instead of depicting owners for a particular year, these maps show original landowners, no matter when the transfer from the federal government was completed. Dates of patents typically begin near the time of statehood and run into the early 1900s. What's Mapped in this book (that you'll not likely find elsewhere) . . . 1393 Parcels of Land (with original landowner names and patent-dates labeled in the relevant map) 29 Cemeteries plus . . . Roads, and existing Rivers, Creeks, Streams, Railroads, and Small-towns (including some historical), etc. What YEARS are these maps for? Here are the counts for parcels of land mapped, by the decade in which the corresponding land patents were issued: DecadeParcel-count 1830s7 1840s813 1850s572 1860s1 What Cities and Towns are in Howard County, Indiana (and in this book)? Alto, Cassville, Center, Darrough Chapel, Greentown, Guy, Hemlock, Indian Heights, Jerome, Judson, Kappa Corner, Kokomo, New London, Oakford, Phlox, Plevna, Poplar Grove, Ridgeway, Russiaville, Shambaugh Siding, Shanghai, Sycamore, Vermont, West Liberty, West Middleton
Toon meer Toon minder