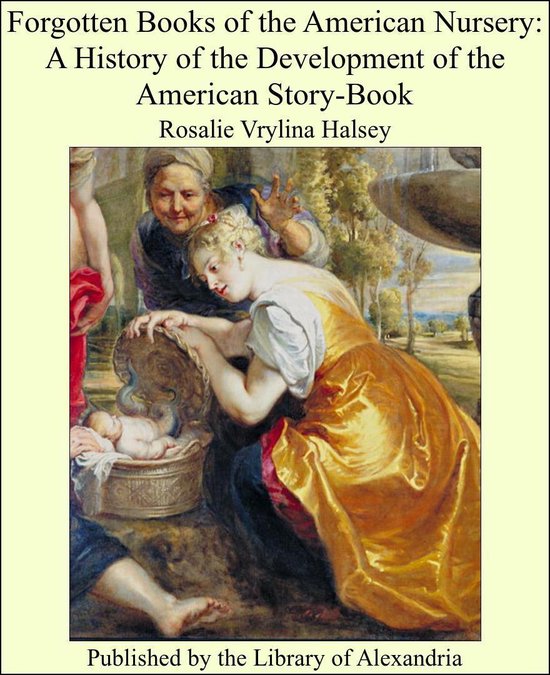 Introductory A shelf full of books belonging to the American children of colonial times and of the early days of the Republic presents a strangely unfamiliar and curious appearance. If chronologically placed, the earliest coverless chap-books are hardly noticeable next to their immediate successors with wooden sides; and these, in turn, are dominated by the gilt, silver, and many colored bindings of diminutive dimensions which hold the stories dear to the childish heart from Revolutionary days to the beginning of the nineteenth century. Then bright blue, salmon, yellow, and marbled paper covers make a vivid display which, as the century grows older, fades into the sad-colored cloth bindings thought adapted to many children’s books of its second quarter. An examination of their contents shows them to be equally foreign to present day ideas as to the desirable characteristics for children’s literature. Yet the crooked black type and crude illustrations of the wholly religious episodes related in the oldest volumes on the shelf, the didactic and moral stories with their tiny type-metal, wood, and copper-plate pictures of the next groups; and the “improving” American tales adorned with blurred colored engravings, or stiff steel and wood illustrations, that were produced for juvenile amusement in the early part of the nineteenth century,—all are as interesting to the lover of children as they are unattractive to the modern children themselves. The little ones very naturally find the stilted language of these old stories unintelligible and the artificial plots bewildering; but to one interested in the adult literature of the same periods of history an acquaintance with these amusement books of past generations has a peculiar charm and value of its own. They then become not merely curiosities, but the means of tracing the evolution of an American literature for children. To the student desiring an intimate acquaintance with any civilized people, its lighter literature is always a great aid to personal research; the more trivial, the more detailed, the greater the worth to the investigator are these pen-pictures as records of the nation he wishes to know. Something of this value have the story-books of old-fashioned childhood. Trivial as they undoubtedly are, they nevertheless often contain our best sketches of child-life in the eighteenth and early nineteenth centuries,—a life as different from that of a twentieth century child as was the adult society of those old days from that of the present time. They also enable us to mark as is possible in no Other way, the gradual development of a body of writing which, though lagging much behind the adult literature, was yet also affected by the local and social conditions in America. Without attempting to give the history of the evolution of the A B C book in England—the legitimate ancestor of all juvenile books—two main topics must be briefly discussed before entering upon the proper matter of this volume. The first relates to the family life in the early days of the Massachusetts Commonwealth, the province that produced the first juvenile book. The second topic has to do with the literature thought suitable for children in those early Puritan days. These two subjects are closely related, the second being dependent upon the first. Both are necessary to the history of these quaint toy volumes, whose stories lack much meaning unless the conditions of life and literature preceding them are understood