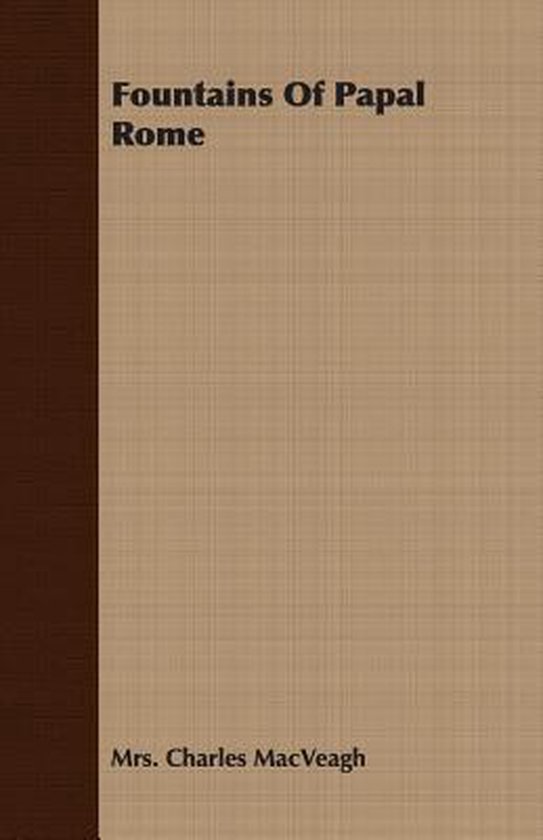 BY MRS. CHARLES MAC VEAGH ILLUSTRATIONS DRAWN AND ENGRAVED ON WOOD BY RUDOLPH RUZICKA NEW YORK CHARLES SCRIB-NESS SONS 1915 COPTBIQHT, 1915, BY CHAELES SCRIBNERS SONS Published October, 1915 TO THE MEMOKY OF A FATHEK AND DATJGHTEB KANSAS CITY. MO. PUBLIC LIBRARY D DD01 QlQfit 1949 CONTENTS ST. PETERS 1 SCOSSA CAVALU 19 PIAZZA PIA 33 CAMPEDOGLIO 41 FARNESE 61 VILLA GIULIA 81 COLONNA 105 QlJATTRO FONTANE 117 TARTARUGHE 133 FONTANA DEL MOSE 143 THE LATERAN 153 TRINITA DE MONTI 167 VILLA BORGHESE, NOW VILLA UMBERTO PRIMO 179 LA BARCAGCIA 195 TRITON 205 NAVONA 13 vfi CONTENTS TREVI 227 PIAZZA DEL POPOLO, 239 PINCIAN 257 FONTANA PAOLA 267 MONTE CAVALLO 285 APPENDIX 303 CHRONOLOGICAL INDEX OF AQUEDUCTS MEN TIONED, ANCIENT AND MODERN . . . 307 CHRONOLOGICAL INDEX OF POPES MENTIONED 308 ALPHABETICAL INDEX OF ARCHITECTS, SCULP TORS, PAINTERS, AND ENGRAVERS MEN TIONED 310 i Vlll LIST OF FULL-PAGE ILLUSTRATIONS View of Fountains and Obelisk of St. Peters from beneath Berninis Colonnade 9 Upper Basin of the Fountain in the Piazza Scossa Cavalli 25 View of the Piazza del Campidoglio from the Left Side of the Cordonata 47 One of the Fountains in the Piazza Farnese ... 71 Fountain of the Virgins 91 Fountain of the Tartarughe 137 The Fountain of the Sea-Horses 183 The Fountain of the Amorini 191 The Fountain of the Triton 209 The Fountain of the Four Rivers 217 Figure of Neptune in the Fountain of Trevi . . 233 Piazza del Popolo from the West 247 Mostra of the Fontanone 279 The Fountain of Monte Cavallo 291 INTRODUCTION ERRATA Page 170, line 18, for London read Westminster. Page 221, line 25, for Leo X read Innocent X. Page 232, line 22, for Tre-vii read Trevie. Moors, have so appreciated tne vajarHnanmof abundant water. There are few squares, even in the Rome of to-day, where, at least in the silence of the night, the sound of splashing water may not be heard. The tiny fountain, often fern-fringed, with its ceaseless, slender stream of water, is the one priceless possession in hundreds of old courtyards, where it fills a damp and lonely silence with charm, or redeems by its indestructible quality of xi INTRODUCTION beauty the meanness of the squalid life about it. It is impossible to think of Rome without her fountains. Yet, after a few weeks, the eye is hardly aware of their presence. It is as if by their very beauty and omni presence they had acquired the divine attributes of sun light and it requires the silence, as with the sunlight it requires the cloud, to rouse our consciousness to their existence. They take their place among the elemental causes of happiness, since the pain we feel at their loss is the only adequate measure of the pleasure they give us. It is difficult for the man of to-day to picture to him self the abundance and splendor of the fountains in imperial Rome. Some idea of their character may be obtained from the description gathered from various sources of Neros fountain on the Caelian. The mingled waters of the Claudian and the Anio Novus aque ducts were brought thither over the Neronian arches. A wall fifty feet in height, faced with rare marbles and decorated by hemicycles and statues, formed the back ground of the first cascade. At the foot of this wall a huge basin received the stream, which then fell into another basin ten feet below the first, and thence flowed into the great artificial lake, described by Suetonius as like unto a sea, which filled allthat space now occupied by the Coliseum. Of great magnificence also was the fountain of Severus Alexander on the EsquHine which served to introduce the Acqua Alexandrina, the elev enth and last water-supply of imperial Rome. A
Toon meer Toon minder