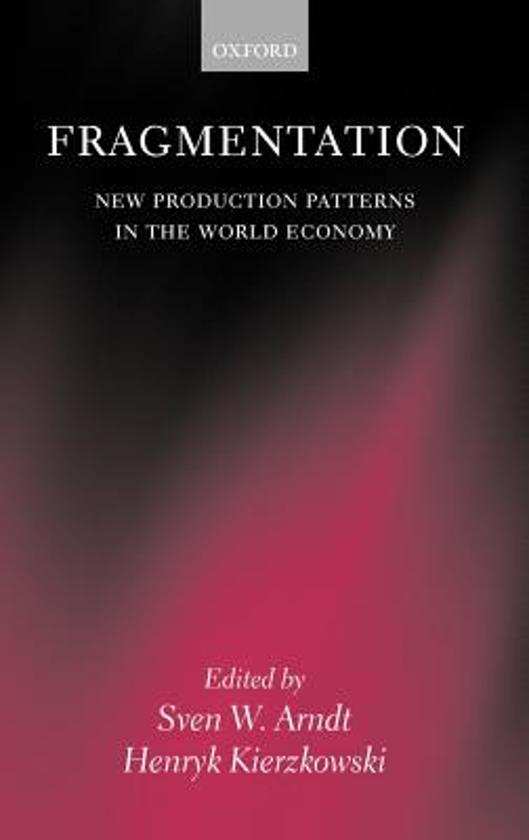 Fragmentation is a term used in this volume to describe cross-border component specialization and production-sharing. Examination of recent trade data suggests that offshore sourcing of parts and components, as well as offshore assembly, are assuming an increasing role in the world economy. The theoretical implications of this type of specialization are examined in several chapters with the aid of both Ricardian and Heckscher-Ohlin trade models. Production is first decomposed ( fragmented ) into its constituent parts and activities, and then it is at this level that factor-intensities and technologies are calibrated. The implications of intra-product specialization and component trade are investigated under conditions of free, restricted, and preferential trade. The role of multinationals is explored and the importance of cross-border service-links among component activities is examined. Overall, extension of the principle of comparative advantage beyond products to the realm of parts and components is welfare-enhancing. Industries take advantage of offshore sourcing in order to reduce costs and increase competitiveness. Component specialization offers new and additional opportunities for the exploitation of scale economies. Across a broad range of conditions, it raises output and employment. Its effects on wages are spelled out. Trade between advanced, high-wage and developing low-wage countries is an obvious candidate for the two-way application of component specialization. The empirical part of the volume presents an evaluation of new data which allow the separation of trade in components and in final products. It also provides assessments of the role of component specialization in the trade of several countries and regions. In addition to their relevance for trade theorists and country specialists, the studies collected in this volume have interesting implications for the conduct of trade policy. They contradict claims that trade with low-wage countries must be welfare-reducing and they suggest new approaches to industrialization and economic development.
Toon meer Toon minder

Edited by two authors who made early and very important contributions to the theoretical framework for the analysis of fragmentation ... the book can be seen as a well-balanced mix of theoretical and empirical studies, all of which make contributions based on the most important and most recent literature about fragmentation. * The Weltwirtschaftliches Archiv: Review of World Economics * In general, the contributions to this book give a comprehensive overview on the state of research on fragmentation, both theoretical and empirical, and can in certain respects be seen as seminal and pioneering studies. * The Weltwirtschaftliches Archiv: Review of World Economics *