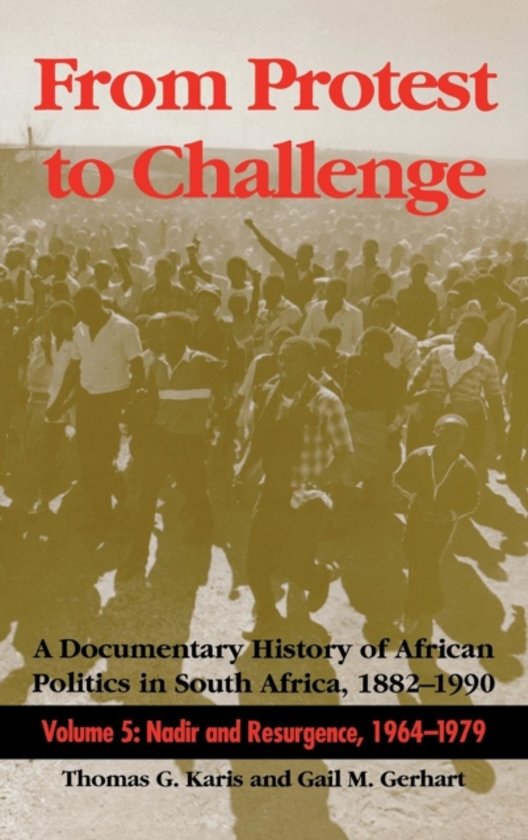 The essays are meticulous and carefully documented accounts which maintain the standard of excellence set by the previous volumes, all of which belong in every library. -Choice Based on extensive documentary archives collected by these researchers, and augmented by interviews with virtually all of the significant antiapartheid activists, this volume covers a formative period in the struggle against white minority rule, 1964-1979. -Africa Today ... a substantial achievement... a wonderful resource for future generations of scholars. -South African Historical Journal Karis and Gerhart's fifth volume is an invaluable addition to their earlier documentary history of the national liberation struggle in South Africa, and includes a priceless collection of new primary historical sources. It ignites vivid flashes of memory... -from the Foreword by Nelson Mandela Volume 5 of this magnificent historical record continues the indispensable study of the struggle for freedom and justice in South Africa. In addition to extensive background essays, it includes formal documents, underground and ephemeral materials, and statements written in exile or in Robben Island prison that have not previously been published.
Toon meer Toon minder

[This] fifth volume is an invaluable addition.... It ignites vivid flashes of memory....-from the Foreword by Nelson MandelaAn invaluable and matchless source of evidence for scholars analyzing South Africa's sociopolitical history. -ChoiceThe overthrow of apartheid in South Africa permits an interpretive change in the thrust of African resistance politics by the editors and authors of this invaluable documentary history. -Foreign AffairsAn enduring resource for historians of South Africa, scholars interested in revolutionary thought and practice, and students concerned with the interplay between violent and nonviolent strategies for social change. -Africa TodayA book that helps us forge a common national story. -Sunday Independent (Johannesburg)[The authors'] feat [is] of such distinction that it is hard to call to mind a single parallel or precedent. -Times Literary Supplement
Toon meer Toon minder