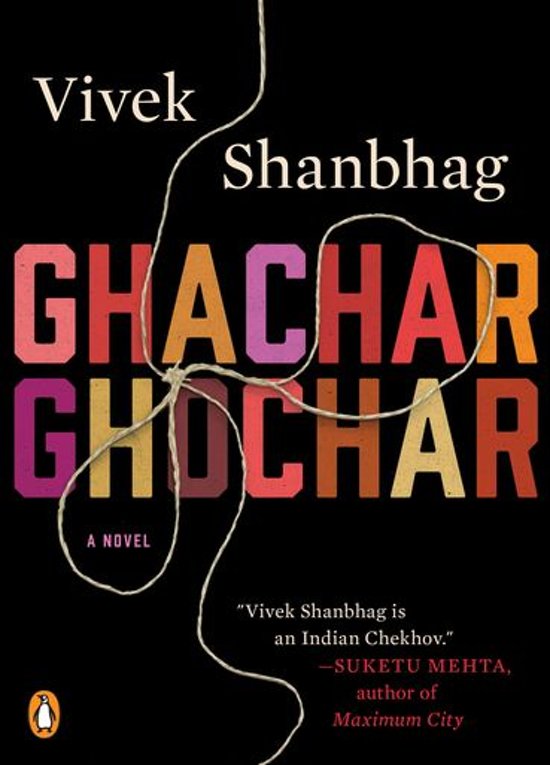 Vivek Shanbhag is the author of eight works of fiction and two plays, all of which have been published to wide acclaim in the South Indian language Kannada. He was a Fall 2016 resident at the International Writing Program at the University of Iowa. The first of his books to appear in English, Ghachar Ghochar was excerpted in Granta’s 2015 India issue.
Alles van Vivek Shanbhag
Toon meer Toon minder

ONE OF VULTURE'S 100 BEST BOOKS OF THE 21ST CENTURY

FINALIST FOR THE L.A. TIMES BOOK PRIZE IN FICTION


A young man's close-knit family is nearly destitute when his uncle founds a successful spice company, changing their fortunes overnight. As they move from a cramped, ant-infested shack to a larger house on the other side of Bangalore, and try to adjust to a new way of life, the family dynamic begins to shift. Allegiances realign; marriages are arranged and begin to falter; and conflict brews ominously in the background. Things become "ghachar ghochar"—a nonsense phrase uttered by one meaning something tangled beyond repair, a knot that can't be untied.


Elegantly written and punctuated by moments of unexpected warmth and humor, Ghachar Ghochar is a quietly enthralling, deeply unsettling novel about the shifting meanings—and consequences—of financial gain in contemporary India.


"A classic tale of wealth and moral ruin." —The New Yorker


"Ghachar Ghochar introduces us to a master." —The Paris Review


Named a Best Book of the Year by the Guardian, Globe and Mail, and Publishers Weekly

Shortlisted for the ALTA National Translation Award in Prose

A great Indian novel...Folded into the compressed, densely psychological portrait of this family is a whole universe. --Parul Sehgal, The New York Times Book Review (Editors' Choice) [Shanbhag] is a master of inference and omission...What's most impressive about Ghachar Ghochar...is how much intricacy and turmoil gets distilled into its few pages...[A] wise and skillful book. --Sam Sacks, Wall Street Journal A classic tale of wealth and moral ruin and a parable about capitalism and Indian society. --The New Yorker Within the tight confines of a hundred pages or so, Shanbhag presents as densely layered a social vision of Bangalore as Edith Wharton did of New York in The House of Mirth...He's one of those special writers who can bring a fully realized world to life in a few pages...The tense fun of reading this vivid, fretful story lies in watching the main characters grab hold of what they think will be rescue ropes, but instead turn out to be slip knots. --Maureen Corrigan, NPR Great Indian novels...tend towards large tomes, written in English. Now, however, the arrival of a new work has shaken up the status quo: Vivek Shanbhag's gripping Ghachar Ghochar. This slim volume...packs a powerful punch, both in terms of the precision of its portrait of one Bangalore-based family, and, by extension, what this tells us about modern India....Shanbhag is the real deal, this gem of a novel resounding with chilling truths. -The Independent (UK) A simple story, well told. . . . Its gently comic tone belies a stunning satire, the full power of which is only apparent as the horror of the ending becomes clear. --Louise Doughty, The Guardian, Best Books of 2017 Masterful...This stunning Bangalore-set family drama underlines the necessity of reading beyond our borders....Ghachar Ghochar is both fascinatingly different from much Indian writing in English, and provides a masterclass in crafting, particularly on the power of leaving things unsaid. -Deborah Smith, The Guardian Ghachar Ghochar introduces us to a master. --Lorin Stein, The Paris Review One of the finest literary works you will ever encounter...a nuanced wonder. -Irish Times A feat of taut, economical storytelling...[with] moments of wonderfully dark, often unexpected, cynicism. --Financial Times One of the best novels to have come out of India in recent decades. --Pankaj Mishra, author of Age of Anger Vivek Shanbhag is an Indian Chekhov. --Suketu Mehta, author of Maximum City In this exquisitely observed, wry and moving novel, the smallest detail can conjure entire worlds of feeling. Vivek Shanbhag is a writer of rare and wonderful gifts. --Garth Greenwell, author of What Belongs to You One of my favorite contemporary writers in English translates one of the leading figures of Kannada literature. The result is mesmerizing, distressing--and altogether brilliant. --Karan Mahajan, author of The Association of Small Bombs Vivek Shanbhag is one of those writers whose voice takes your breath away at the first encounter. --Yiyun Li, author of Dear Friend, from My Life I Write to You in Your Life Ghachar Ghochar is one of the most striking novels you'll read this decade. . . . In Shanbhag's hands, the Indian family is revealed in layers; as one layer peels away, what lies beneath is left raw and exposed. --Nilanjana Roy, Business Standard (India) [Shanbhag is] an extraordinary storyteller� --� one astutely alive to the competing forces of self-interest and empathy. --Jonathan Lee, Electric Literature Suketu Mehta deems Vivek Shanbhag 'an Indian Chekhov'....Shanbhag has earned this lofty comparison. -The Globe and Mail (Canada) A firecracker of a novel...concise and mesmerizing. --Publishers Weekly, starred review A Tolstoyan portrait of family conflict and shifting priorities in modern-day India....Captivating. --Shelf Awareness, starred review A compact novel that crackles with tension. --Kirkus Reviews A delight...You will read Ghachar Ghochar...in part of an evening, about the length of time you'd need to watch one of Chekhov's masterpieces. You'll experience the same pleasure. -CounterPunch Very rarely a book comes along that you want to thrust in the hands of everyone--readers and non-readers. Ghachar Ghochar is one such book. --Prajwal Parajuly, The Hindustan Times (India) Altogether a delight to read . . . Shanbhag gives us an insider's feel for the concerns that have shaped the middle class in the last half a century. --Girish Karnad, The Indian Express (India) An ingenious tale of how material wealth robs a family of its moral fortitude . . . [Shanbhag] is obviously a master of the form. --Mint (India) Ghachar Ghochar reveals a consummate fiction writer at the height of his powers. . . . a literary sensation across India. --Scroll.in (India) Ghachar Ghochar is a book of distilled simplicity, its surface of seeming artlessness hiding that most complex and complicated of things--truthfully rendered human life. Beautiful, tense, surprising, utterly convincing and wise, and translated with real inspiration by Srinath Perur. --Neel Mukherjee, author of The Lives of Others A remarkable novel about the fragile civilities of bourgeois life. The reader becomes absorbed in the unforgiving self-knowledge and expansive humanity contained in every page. --Amit Chaudhuri, author of Freedom Song and Odysseus Abroad
Toon meer Toon minder