God Blew, And They Were Scattered Book Ii Peter's People, the Colonial Years 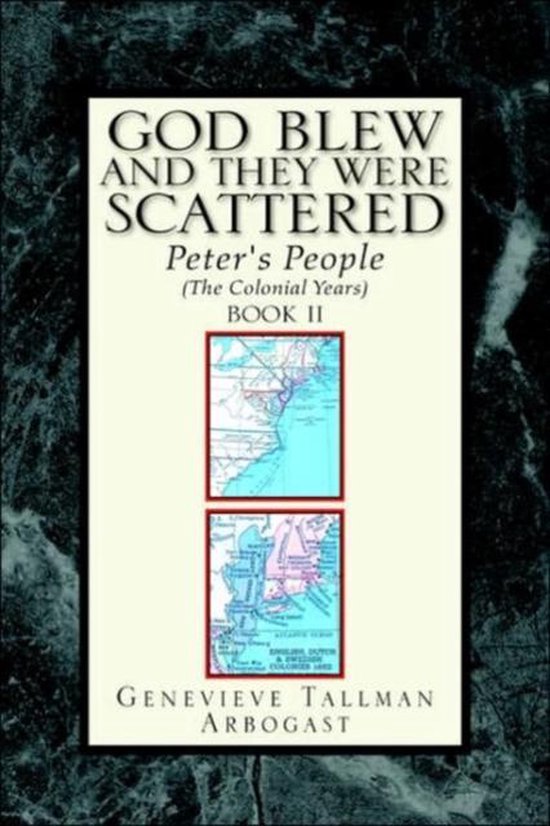 Continuing with the saga of the family Taelmann (anglicized to Talman, Tallman, Tollman, Talma, etc.), GOD BLEW AND THEY WERE SCATTERED, BOOK II, Peters People (The Colonial Years), the author, Genevieve Tallman Arbogast, has, from extant records, laced together events that would have defined the lives of descending generations. This narrative begins in Denmark, in Schleswig-Holstein. As the map changes years later, with the end of the Thirty Years War (1614-1648), Denmark will be sharing a political life in common with Germany and Sweden, as will the formerly independent city-state of Hambrough. However, when the allied families of Talman and de Lichte arrived in Schleswig-Holstein, it was under the jurisdictional rule of a German prince, Duke John Adolphus, who would within five years of their arrival ascend to the throne of Scandinavia as Christian IV of Denmark. For the purposes of this undertaking, however, it will suffice to say that Holsteins records, then and now, can claim a German heritage. The allied families of Taelmann and de Lichte arrived in Schleswig-Holstein about 1583, following their narrow escape from the Spanish Netherlands. Prior to their migration, they had been threatened by the rejuvenated Spanish Inquisition, revived during the Counter-Reformation movement of the Catholic Church in the sixteenth century. As disclosed in Book I, the Jesuits of that movement were responsible for the burnings of so many so-called `Protestant heretics that their crimes against humanity have been compared to that of Hitlers modern day holocaust. As time elapses, the children of the next generation are caught up in the wars of Scandinavia, which evolves to eventually draw them into the conflicts of the `Thirty Years War. As might be expected, several members of the Taelmann family are lost on the battlefield. As a result, the elder Peter Taelmann tries to convince his fourth generation sons to leave Schleswig for opportunities in the New World. That begins an adventure for young Peter Taelmann (Talman), which, in 1647, takes him to the Island of Barbados, where he accepts a position on Island Plantation, under the employ of Philip Hill. During his tenure of almost three years, in the capacity of physician and apothecary, he strives to rehabilitate abused and injured African captives, who are being brought to the island by Captain le Blanc, the slaver. The care-for-work agreement, between the planter and the captain of the Africaneer, makes it possible for failing Island Plantation to continue growing tobacco. The struggle to return the traumatized victims to health, while running a plantation, brings many poignant moments, introducing such delightful characters as Matilda, Prissy, and Mingoe. Rudie Braithewaite and his wife Evie, who operate a tavern on the wharf at Surinam, bring color to the narrative as they introduce the young physician to the island and its history, before they become victims of the burgeoning slavery business. As matters become intense on the island, safety for the inhabitants of Island Plantation becomes a concern. Mistress Hill urges her husband to return with her and their daughter to their former home in Newport, Rhode Island. However, obsessed with the idea of again making the plantation profitable, Hill, instead, begins to search for backing to convert his cash crop from tobacco to sugar cane. Those plans include the development of a shipping service, necessary to transport sugar and its by-products to the North American mainland for exportation to Europe. In the interim, the young physician becomes attracted to the planters beautiful daughter; and, as the attraction is reciprocal, Miss Ann manipulates Peter into riding with her to exercise her fathers thoroughbred horses. As he is taught the skills of an equestrian, many evenings are spent riding along a sandy stretch of beach, which separates Island Plantation from the Atlantic Oc

Originele Titel
God Blew, and They Were Scattered Book II