Great Men As Prophets Of A New Era 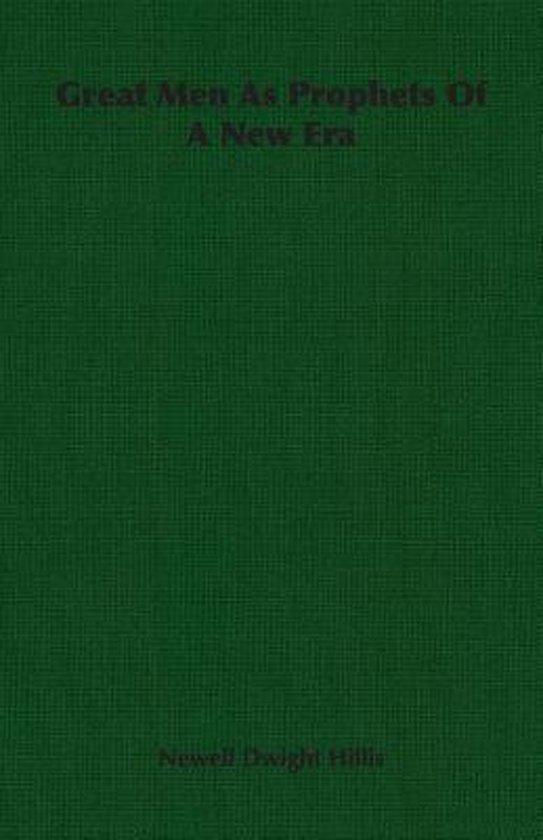 Text extracted from opening pages of book: Great Men a& Prophets of a New Era By NEWELL DWIGHT HILLIS Author of The Investment of Influence A Mans Value to Society, Great Books as Life Teachers NEW YORK CHICAGO Fleming H. Revell Company LONDON AND EDINBURGH Foreword REAT institutions are the shadows that VJT great men cast across the centuries. A great law, a great liberty, a great art or tool or reform represents a great soul, organized, and made unconsciously immortal for all time. Explorers trace the Nile or Amazon back to the lake in which the river takes its rise. His torians trace institutions back to some hero from whose mind and heart the life-giving movement pours forth. When the scholar travels back to the far-off beginnings of juris prudence, he comes to some Moses, toiling in Thebes, to some Solon in Athens, to some Jus tinian in Rome. Not otherwise the renais sance of painting, sculpture, and architecture begins with some Giotto, some Michael Angelo, some Christopher Wren. Scholars often speak of history as narratory or philosophical, but in the last analysis, history is biographical. These studies were prepared for the students of Plymouth Institute in the belief that biog raphy is life's wisest teacher, and that the lives of great men are the most inspiring books to be found in our libraries. N. D. H. Plymouth Institute, Brooklyn, N. 7. 5 Contents L Dante, and the Dawn After the Dark Ages ...... 9 ( 1265-1321) II. Savonarola, and the Renaissance of Con science ..... 34 ( 1452-1498) III. William the Silent, and Brave Little Holland ..... 55 IV. Oliver Cromwell, and the Rise of De mocracy in England ... 84 ( 1599-1658) V. John Milton, the Scholar in Politics, 115 (1608-1674) VI. John Wesley, and the Moral Awaken ing of the Common People . . 143 ( 1703-1791) VII. Garibaldi, the Idol of the New Italy . 166 ( 1807-1882) VIII. John Ruskin, and the Diffusion of the Beautiful ..... 190 ( 1819-1900) Index ...... 217 DANTE ( 1265-1321) And the Dawn After fhe Dark Ages ALL scholars are agreed as to the classes of men who build the State. There are the soldiers who keep the State in liberty, the physicians who keep the State in health, the teachers who sow the land with wisdom and knowledge, the farmers and merchants who feed and clothe the people, the prophets who keep the visions burning*, and the poets who inspire and fertilize the soul of the race. But in every age and clime, the poet has been the real builder of his city and country. The only kind of work that lives forever is the work of the poet. Parthenons and cathedrals crumble, tools rust, bridges decay, bronzes melt, but the truth, put in artistic work, sur vives war, flood, fire, and the tooth of time itself. The poet's power, said George William Curtis, is not dramatic, obvious, imposing, immediate, like that of the states man, the warrior and the inventor. But it is as deep and as strong and abiding. The soldier fights for his native land, but the poet 9 Dante makes it worth fighting for. The statesman enlarges liberty, but the poet fosters that love in the heart of the citizen. The inventor multiplies the conveniences of life, but the poet makes the life itself worth living. We cannot find out the secret of his power. Until we know why the rose is sweet, or the dew drop pure, or the rainbow beautiful, we can not know why the poet is the best benefactor of humanity. But we know that the poetis the harmonizer, strengthener and consoler, and that the inexpressible mystery of Divine Love and purpose has been best breathed in parable and poem. By common consent the three great poets of the world are Homer, Dante and Shake speare; and of the three, the two supreme names are Dante and Shakespeare. After six centuries, what Hallam said nearly a hundred years ago still holds true: Dante's orbit is his own, and the track of his wheels can never be confounded with that of any rival/ 7 Dante was the greatest man of his country, he wrote the greatest book of Ms era, he
Toon meer Toon minder