Ground A Reprise of Photographs from the Farm Security Administration 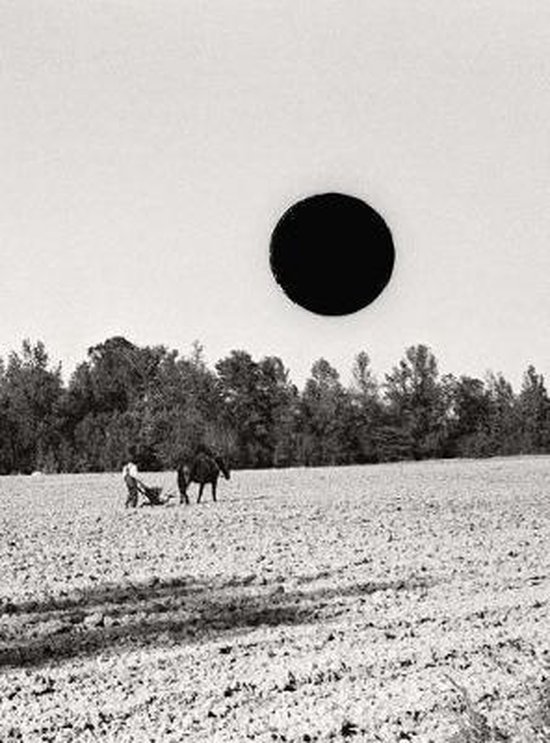 In Ground, Bill McDowell has assembled a series of killed negatives from the FSA archives, many of which have never before been published. These include several photographs from 1936 that Walker Evans had made for Let Us Know Praise Famous Men, the book he published with James Agee. Also included are never before published photographs by Walker Evans, Russell Lee, Ben Shahn, Marion Post Wolcott, John Vachon, Paul Carter, Theodor Jung, Carl Mydans, and Arthur Rothstein. McDowell has poetically organized the photographs in Ground according to how and what they represent. While the book's images document 1930s agriculture and landscapes, they also have been chosen for the manner in which their black hole (created by Roy Stryker's hole punch) abstracts its subjects. McDowell feels that in today's culture the killed negatives' black hole has the appearance of being a contemporary mark, one current with the practice of intervention, alteration, and appropriation. This provides the photographs a temporal duality in which they present the post-Depression era through a contemporary filter. In our continuing struggle to recover from 2008's Great Recession, these photographs speak to now even as they confer on past government programs, race and class, damaged and bountiful land, drought, flood, and exodus. Bill McDowell is the 2013 recipient of the Peter S. Reed Foundation Grant, and has received the Aaron Siskind Individual Photographer's Fellowship, the New York Foundation on the Arts Photography Fellowship, as well as many other artist grants. He is a professor in the Department of Art & Art History at the University of Vermont. McDowell's photographs are represented in collections at the Yale University Art Gallery, International Museum of Photography at the George Eastman House, Museum of Fine Arts, Houston, Harry Ransom Center at the University of Texas at Austin, Deichtorhallen Museum, Santa Barbara Museum of Art, Light Work, Wellesley College, St. Lawrence University, and Rochester Institute of Technology. His selected solo exhibitions include Jan Kesner Gallery, in Los Angeles, Houston Center of Photography, Robert B. Menschel Gallery at Light Work, The University of Notre Dame, Kenyon College, and St. Lawrence University. His group shows include the Santa Barbara Museum of Art, Dallas Museum of Art, Blue Sky Gallery, Society for Contemporary Photography, in Kansas City, and the Triennial of Photography at the Deichtorhallen Museum, Hamburg. McDowell's project, Banner of Light: The Lily Dale Photographs, was published by Light Work in Contact Sheet 96, and his photographs have appeared in Art in America, Art Issues, The New Yorker, Russian Esquire, Guernica, Spot, and Exposure. Jock Reynolds, Artist and the Henry J. Heinz II Director of the Yale University Art Gallery Jock Reynolds earned a B.A. in 1969 from the University of California, Santa Cruz, and an M.F.A. in 1972 from the University of California, Davis. From 1973 to 1983 he was an associate professor and director of the graduate program at the Center for Experimental and Interdisciplinary Art at San Francisco State University, and was also a cofounder of New Langton Arts, San Francisco's premier alternative artists' space. From 1983 to 1989 Mr. Reynolds served as the executive director of the Washington Project for the Arts, a multidisciplinary visual artists' association in Washington, D.C., before becoming the director of the Addison Gallery of American Art at Phillips Academy, Andover, Massachusetts, a position he held until September 1998, when he was appointed the Henry J. Heinz II Director of the Yale University Art Gallery and professor (adjunct). Mr. Reynolds has won numerous grants and awards, including two National Endowment for the Arts Visual Artists fellowships and many more.
Toon meer Toon minder