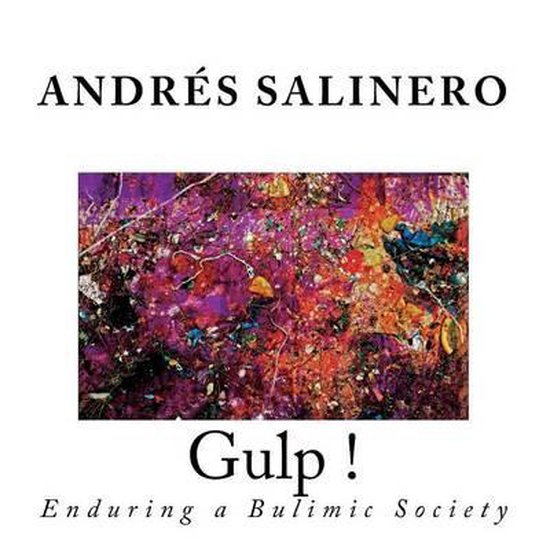 Gulp! is a non - fiction, documentary essay attempting to expose to light our behavior as members of Western societies where consumerism has become the only religion; even at Third World (basically meaning low income) countries like these of South America, where poverty is chronic and transcends generations. Not so long ago, Public Education issued society’s future citizens positive moral values and attitudes towards human interrelationships. In brutal contrast, contemporary society teaches youngsters how to exclude, discriminate, utilize, repudiate and finally discard the “other”, to mock and deride the different until his or her complete social neutralization. For some reason, humans tend more and more to live in overcrowded cities where crime, violence and all sort of social pathologies are the everyday rule. We seem to love our big cities constant chaos, the polluted air, the overcrowded markets, banks, streets, schools, hospitals and everything, the pestilent garbage everywhere, the corrupted Police and Justice members, the violence against the poor and those who do not fit into the model… In any case, all we do is asking for more and more repression, more and more armed policemen, more and more street cameras to monitor everyone’s behavior… George Orwell and Ray Bradbury were right: now we know theirs was not Science Fiction but a raw, harsh picture of what would come after 1984 and the sweet dandelion wine. Indeed, we are slowly killing our Mother Earth. Average world´s temperature is abruptly rising: poles are melting, polar bears are starving, glaciers are disappearing, oversized chunks of Antarctica ice float adrift by the ocean… Just note this: we’ll be more than 10,000 million people in 2050. How we will feed ourselves then? What will we do with the billions of tons of garbage we produce daily? Where will the wealthiest countries of the world discard their nuclear and technological waste when Africa and their corrupted kingdoms finally collapse due to their endless ethnical conflicts ? Where we will obtain energy from when the oil industry ceases being profitable? Lithium? Nuclear fission? Hydrogen? What other forest of our planet -if it exists- will absorb millions of tons of carbon daily when the Amazon finally dies out due to deforestation? Where and how will fresh water be obtained from? The Andes glaciers? Antarctica? Where will millions of people live when thousands of cities by the oceans coasts of the world disappear under hot sea waters going up and up, every day a bit? The Future finally arrived. So what now? Collapsing and suddenly disappearing is our fatal destiny? It certainly was for past civilizations, like the Maya in Central America. Are we condemned to repeat the story? Are we fatally destined to it? If Darwin was right, aren’t we supposed to be more intelligent than those “proto” humans who lived thousands of years ago? Gulp! is not a planned essay: it merged and grew by itself, by its own prepotency, as years went by. Irony, sarcasm and melancholy play a significant role along the essay as a whole, and also in most of each individual photograph. As a result, a sort of dark vision of the close future could be inferred. Some radicals could take Gulp! by as a visual manifesto against Capitalism. Those who think like this may be right. Yet, the context in which this life long work was done should be considered. At some point, Gulp!, as well as Reality and the Terra Incognita Collection, have a similarly simple origin: the arousal of his author to certain consciousness far from the habitual consuming standard according to which everything is fleeting and perishable -beginning by people and ideas.
Toon meer Toon minder