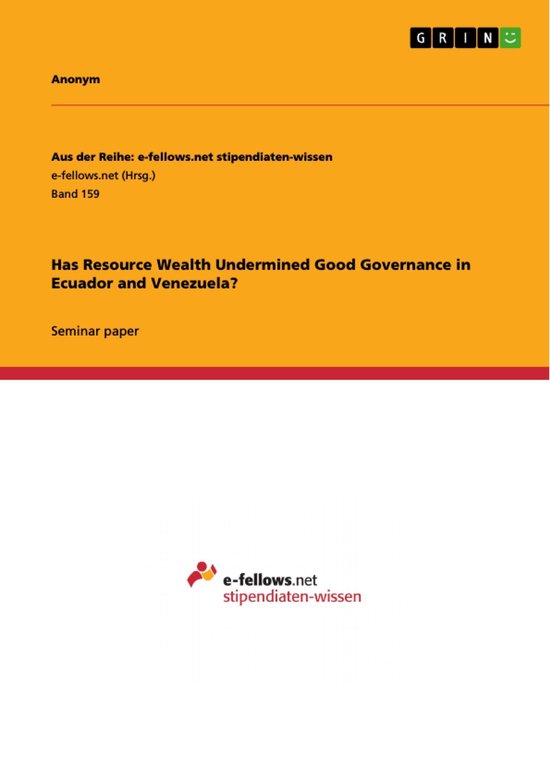 Seminar paper from the year 2010 in the subject Politics - International Politics - Region: Middle- and South America, grade: 1,00, Jacobs University Bremen gGmbH, language: English, abstract: When I visited Venezuela as second travel destination after Ecuador in Latin America last year, I remember very well passing by a huge mural painted on an oil refinery, showing: 'Patria, Socialismo o Muerte'. I was struck by that image, as it visualized the impact of the 'black gold', and the attachment of national salvation and ideology to a single resource. Petroleum has changed the trajectory of all countries with the fortune (or the curse, depending on the point of view) of being located on top of its enormous basins more significantly than social scientists could have imagined. While geographically speaking the Middle East has received most academic attention, and also singular African countries have been examined thoroughly, this paper focuses on the case of Latin America, more specifically on its two OPEC members Ecuador and Venezuela. Furthermore, in the context of this course, I became inspired to explore the development and current status of the governmental authorities in both countries, based on the theoretical concept of good governance. Consequently, I will investigate in the link between national wealth in and subsequent exploitation of oil and gas, and its interaction with governance in the respective countries. I will introduce the so-called resource curse phenomenon in this context, as successful management of this somewhat messy socio-economic problem is doubtlessly an important indicator of good governance. Often overlooked in this discussion is the distinguishing feature that governance type plays in the resource curse, as most of the hydrocarbon-rich countries have no democratic political system (Ross 2001). While Ecuador and Venezuela as defective democracies do not directly fall into this category, I will argue that they nonetheless display all major features of the resource curse, so that development, defined in its broadest sense, suffers. The seemingly paradoxical outcome of resource-abundance and poor development needs further governance-focused investigation. I will hence introduce the concept of good governance, followed by an evaluation of Ecuador and Venezuela using objective measurement tools for good governance. In a final point I will address the question of causality and the related problems, due to the complex interaction of resource wealth and governance performance.