The atrium in the imperial palace on the Palatine Hill. A splendid and even gorgeous apartment, perhaps fifty feet long and twenty broad. The spectator views it from one side, and one of the longitudinal walls thus constitutes the background. At the left of the spectator is the arched doorway that leads into the ostium, or entrance hallway. At the right are two doors giving into the peristyle, or garden. In the back are doors opening upon various apartments, among them, a small triclinium or banquet-room. The atrium has walls of Cipilino marble, and there are ornate pillars supporting each door-frame. In the centre of the floor is a small pool, perhaps six by eight feet, and flush with the floor. Above it, in the ceiling, is a skylight with movable bronze sashes, and gaudy silk blinds beneath. Despite the architectural magnificence of the apartment, its furniture, to modern eyes, seems meagre. To the spectator's right, between the garden doors, there is a solium—a high, stiff, ungainly chair, very wide, and upholstered in imperial purple, i.e., a colour rather like the crimson of today. In front of the solium stands a very ornate mensa, or table, with a few backless stools. There is nothing more. Light is furnished by Roman lamps on very tall candelabra. The moon filters through the skylight. It is the night before New Year's Day of the year 221 A.D. As the curtain rises, HELIOGABALUS' atriensis, or major-domo, RUFINIUS by name, ushers in the two physicians, PISO and POLORUS.RUFINIUS is a stout Gaul with a full red beard. He wears, of course, no toga, but there are chevrons of imperial purple on the short left sleeve of his tunic. PISO and POLORUS wear the paenula—a long, plain cape, with a hood not unlike a monk's cowl. PISO'S paenula is black, but POLORUS' shows the florid colours of a modern bathrobe. PISO is an old man and wears a long white beard; POLORUS is younger and wears his clipped, almost in the Van Dyke manner. RUFINIUS, as soon as the two doctors have come to anchor by the pool, offers them a salver on which stand two goblets of wine and a dish of peanuts. 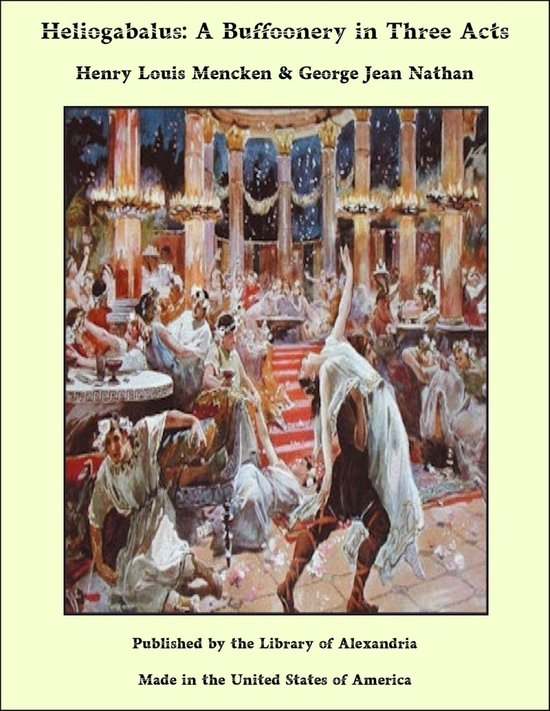