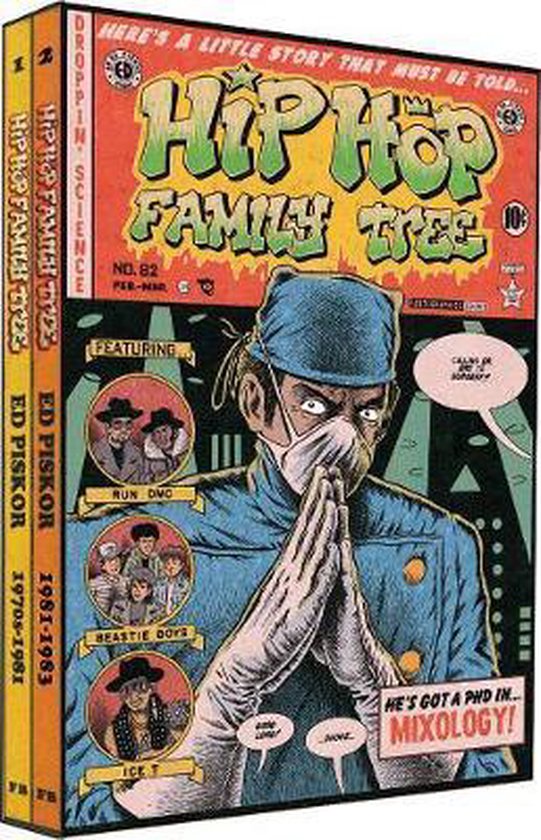 "Ed Piskor (born July 28, 1982) is an alternative comics artist operating out of Pittsburgh, Pennsylvania. He is a former student of The Kubert School and is best known for his artistic collaborations with underground comics pioneers Harvey Pekar of American Splendor fame, and Jay Lynch who illustrates Garbage Pail Kids. He has a cult following amongst minicomic fans with his series Deviant Funnies and Isolation Chamber.

A special slipcover and a special comic are included in the smash hit’s gift set. To celebrate the resounding critical and commercial success of the first two volumes of Ed Piskor’s unprecedented history of Hip Hop, we are offering the two books in a mind-blowingly colorful slipcase, drawn and designed by the artist. As if that’s not enough, in addition to the two books and the slipcase itself, Piskor has drawn a 24-page comic book ? Hip Hop Family Tree #300 ? specifically for this boxed set that elegantly reflects the confluence of hip hop and comics, which was never more apparent in the early 1990s than with the famous Spike Lee-directed Levi Jeans commercial starring Rob Liefeld, who went on to create Youngblood and co-found Image Comics, not to mention ending up on the radar of gangster rapper Eazy E. Piskor tells this story as a perfect parody/pastiche/homage to ’90s Image comics. Full color
Toon meer Toon minder