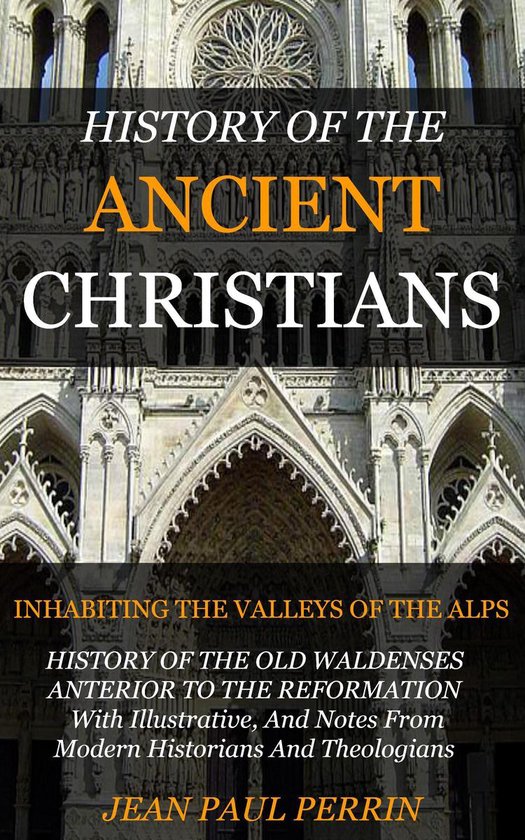 It has given me no small pleasure to learn that you are engaged in publishing an American edition of the Rev. Jean Paul Perrin's "History of the Old Waldenses, anterior to the Reformation." In the execution of this undertaking, you are undoubtedly rendering an important service to the cause of evangelical truth and order. It is indeed wonderful that a work so interesting, and so truly instructive and valuable, which has been more than two centuries before the public, and which was translated into the English language more than a hundred years ago, should never have been given from the press on this side of the Atlantic: a work, too, so often inquired after, so frequently quoted, and deemed of such high authority in the department to which it belongs. I cannot help hoping and believing that your enterprise will be favorably received, and suitably rewarded. Such a work ought; undoubtedly, to be within the reach of all who are disposed to inquire what the Church of God has been in its best days since the Apostolic age. The promise of the Savior to his apostles was that the gates of hell should never prevail against his church. This promise seems to secure to his people that there shall be, in all ages, and in the worst of times, a true and substantially pure Church; that is, that there shall always be a body of people, more or less numerous, who shall hold fast the doctrines and order of Christ's house, in some good degree, in conformity with the model of the primitive Church. Accordingly, it is not difficult to show that, ever since the rise of the "Man of Sin," there has been a succession of those whom the Scriptures style, "Witnesses for God" — "Witnesses for the truth;" who have kept alive "the faith once delivered to the saints;" and have, in some good degree of faithfulness, maintained the ordinances and discipline which the inspired apostles, in the Master's name, committed to the keeping of the Church. Among these Witnesses, the first that we distinctly read of were the Paulicians. They rose up about A.D. 660. A very interesting account of these pious people is given in Milner's Ecclesiastical History of the seventh century; and a still more extended and distinct account, in the Revelation Adam Blair's History of the Waldenses, Book I, chapter I. While the Paulicians were still maintaining their faithful testimony, the Waldenses arose; or, rather more probably, these two denominations had a common origin, and a common faith. The name Waldenses, the most common and popular one of these humble and devoted people, was evidently derived — not from Peter Waldo, but from the place of their dwelling. The following statement of the learned and ingenious Robert Robinson, a divine of Cambridge in England, who died more than half a century ago, places the origin of this name in what I suppose to be the true light. "From the Latin, Vallis, came the English, valley; the French and Spanish, valle; the Italian, valdesi; the Low Dutch, valleye; the Provencal, vaux, vaudais; the ecclesiastical Vallenses, Valdenses, Ualdenses, and Waldenses. The words simply signify valleys, — the inhabitants of valleys, and no more. It happened that the inhabitants of the Pyrenees did not profess the Catholic faith. It fell out also that the inhabitants of the valleys about the Alps did not embrace that faith. It happened, moreover, in the ninth century, that one Valdo, a friend and counselor of Berengarius, and a man of eminence, who had many followers, did not approve of the Papal discipline and doctrine. And it came to pass, about an hundred and thirty years after, that a rich merchant of Lyons, who was called Valdus, because he received his religious opinions from the inhabitants of the valleys, openly disavowed the Roman religion, supported many to teach the doctrines believed in the valleys, and became the instrument of the conversion of great numbers. All these people were called WALDENSES." THE WALDENSES THE ALBIGENSES THE VAUDOIS
Toon meer Toon minder