Hold It Right There, Mister Preacher! An Introspective Look at What Passes for Biblical Discourse - Current Edition 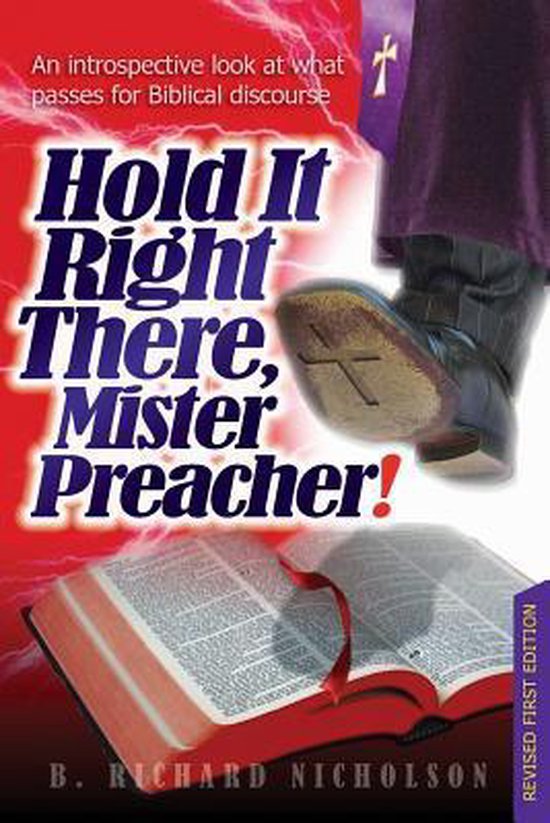 THERE HAS ALWAYS been concern among God's people over whether their fellow believers are walking the talk. Rarely is the focus turned to the talk itself and just how walkable it is. Paul, in I Corinthians 1, refers to "the foolishness of preaching." This was an obvious quip at the scoffing Greeks and others with whom he was in confrontation from time to time, who held that disdainful view of the gospel. "For," he explains, "the preaching of the cross is to them that perish, foolishness." He obviously didn't think it to be so, nor was he enjoining believers to think it so or make it so. So it's hardly likely that with that declaration he was in any way giving the nod to the preaching of foolishness. Yet the sarcasm of the apostle's phrase has clearly been lost on us as we continue to make our religion the butt of comedy, then turn around and blame the comedians. Flip through your tv family channels on a Sunday morning and observe the power accorded by the business of the word, and how easy an enterprise it is. Mount the pulpit armed with some street smarts, a well oiled tongue and a Bible, and the world is your oyster. In this 380-page hermeneutic probe, B. Richard Nicholson, from his own Seventh-day Adventist milieu, intent on a quest for Biblical accuracy, poses a series of unsettling questions examining some of the established cliches and assumptions in the rhetoric of the "Remnant" in particular and Christian orthodoxy in general. Does faith healing have a place in Adventism's health message? Is it right to pray expecting full-blown, outright miracles, or must we temper our expectations with the acknowledgment, "If it be thy will"? Does God destroy? Is he ever violent? Is there ever any reason to be afraid of him? Or does God, like the hippies of the '60s and '70s, only 'make love, not war'? As a people of law who embrace the KJV's Revelation 22:14, and in light of the clear tension between Paul and James on the role of works, how far can we take the former's unique assertions of "the righteousness of God without the law" (Romans 3:21)? What exactly is the Bible's message on dress and ornaments? In Daniel 3:25, who was it that Nebuchadnezzar said he saw in the flames with Shadrach, Meshach and Abednego? Did Moses do right in slaying the Egyptian taskmaster? Does the Bible view that deadly intervention as an act of faith? Or did he, as our expositors routinely assert, jump ahead of God, take matters into his own hands, and commit murder? What about the sins of adultery, bigamy and incest? Is there an evolution behind that ethic? Is Isaiah 8:20 a rigid insistence on 'the truth, the whole truth, and nothing but the truth'? Or could it rather be just a negative way of pointing out a direct correlation between the measure of light in any teaching or doctrine and the extent to which it conforms to scripture? Is there ever such a thing as relative truth? Is it at all possible to take issue on any point, however minor, with your denomination's founder and most revered voice and still be considered a loyal member? Says the messenger to the Remnant in her book, Counsels to Writers and Editors, p. 35: "The fact that certain doctrines have been held as truth for many years by our people, is not a proof that our ideas are infallible. Age will not make error into truth... No true doctrine will lose anything by close investigation.""
Toon meer Toon minder