Home On The Strange 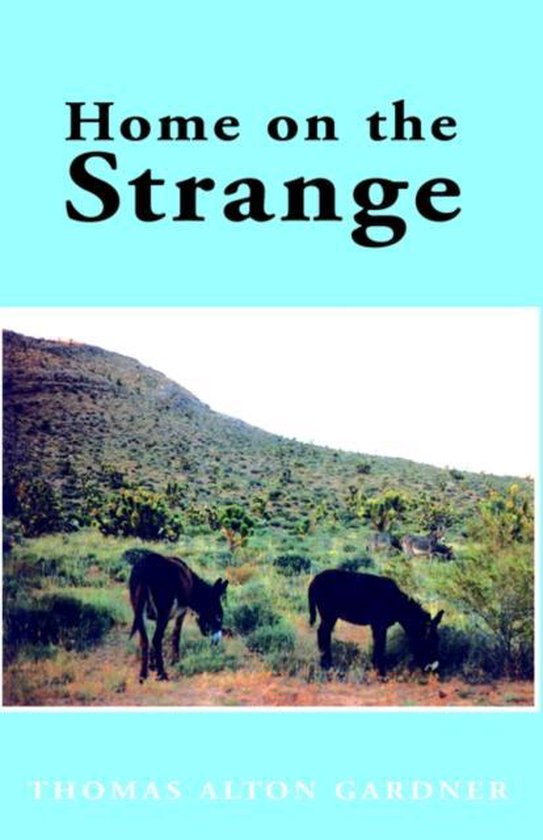 HOME ON THE STRANGE An Offbeat Mystery Jeff and Terry Winslow are tired of life in the big city. So it seems like fate when they run into Jeff's old Veterinary school chum at a convention. Stewart Varney is doing service for the state of Nevada in a small town, paying back an obligation for a college grant, and is equally tired of the country life. They happily agree to swap lives for one year, and Jeff hands his practice to Stewart, while Terry takes a sabbatical from her job as an anthropology professor. Jeff and Terry arrive in the quirky town of Silver Peak to find a very different world from the one they left. The Mayor is a nudist, acid reject who lives in a copper-clad tower on the town's highest hill, a brothel serves as the town's gathering spot, prostitutes and prospectors are numerous, and the town's most revered citizen is a burro that loves good coffee and watches Star Trek religiously. Jeff also discovers that he is not only the town Veterinarian, but also the town Doctor, one of many things Varney neglected to mention. From their very strange home that also serves as his office, they become acquainted with the townsfolk and their various maladies. Jeff biopsies a growth from Jenny the burro, when her owner, Jack Derry, asks the couple to accompany him to a strange find out in the desert. After a long hike, they come upon a flexible, metallic, cylindrical object half-buried in the sand that was exposed by the latest monsoon. They need help to get it out, and enlist the town's leaders, including the hefty, female cafe owner, Biggie, and brothel owner, Darrel Barlowe. They store what they come to call "whateverthehellitis" in the Winslow's stable. Meanwhile, Terry notices that Marilyn, one of the local prostitutes, has been spending a lot of time at the Copper Castle, home of the secretive mayor known as Zeus. She confronts the girl, pays her for information about the strange man, and learns that he insists on nudity, has no penis, and is paying her to work on a large item of unknown origin in the big tower, which is surrounded by a mammoth junkyard. Soon after in San Francisco, Stewart Varney gets a mysterious call saying that "they found it". Jenny's biopsy is cancerous, and the whole town pitches in to help pay for her treatment. The "whateverthehellitis" group decides to try to get inside their find. They use every possible method, including explosives and a chainsaw, but are unable to enter. During the process, Marilyn calls to tell them that State Troopers are on their way to the Winslow's on a tip that they are growing Marijuana, but stopped for some action at the brothel. She keeps them busy, while in a last ditch effort, Jack, Biggie, Terry, Jenny the mule, and Jeff disrobe and visit the mayor to see what he knows. They walk up the high peak to find him waiting. He explains that he is from the Vega star cluster, and was sent to recover a probe that vanished here, unable to withstand Earth's atmosphere. His people have transcended matter, and live as pure light and energy. The probe is the second of two, as the first was the craft in Roswell. He disguised himself as an acid-freak to explain his strange behavior when he first landed in the sixties, and built the Winslow residence and then the Copper Castle as devices to try to find the probe, but the local uranium deposits made it very difficult. His companion, Jenny, was traded with money to Jack for the town, in the hope that the prospector might come upon the probe in his travels. Zeus regards clothing as a light barrier and, therefore, pollution. Sensing trouble at the stable, he spirits them all back to the probe as light. At the stable, the cops have arrived, but are delayed by the naked forms of Terry and Biggie outside, while the men try to figure out how to hide or remove the probe. But, it's too late, and Zeus and the others hide in the craft-- one must be naked to ent
Toon meer Toon minder

Originele Titel
Home on the Strange