Houses of Glass Stories of Paris 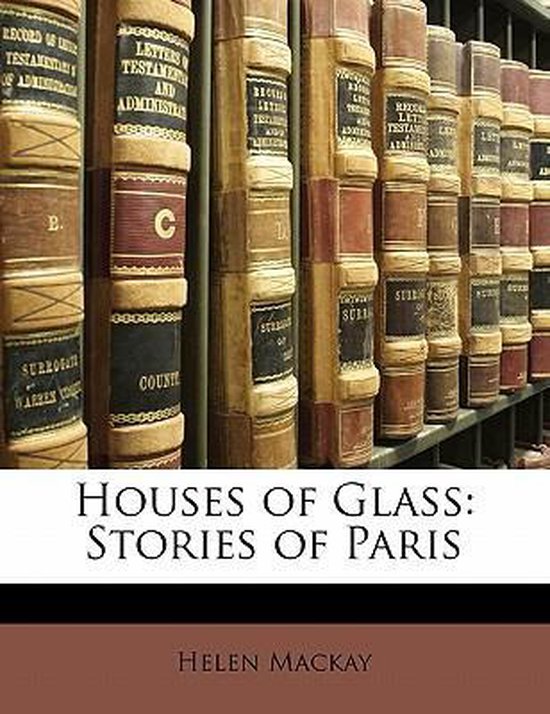 ''Houses of Glass'' is the title of an odd little volume, so unpretentious in its general appearance that it came near being overlooked. And that would have been a pity, because while one may honestly admit a difference of opinion regarding the importance of the subject-matter of this collection of stories and sketches, there can be no question about their vividness of portrayal and their mastery of technique. The author's name is Helen Mackay. The sub-title proclaims the contents to be ''stories of Paris,'' the paper binding, the typography and, indeed, all the details of book-making [in the original publication] are essentially French. The stories themselves are equally unmistakable in their Gallic flavor. Parisianmonde and demi-monde move with uncompromising frankness through its pages. There are several stories that would lend themselves admirably to a brief retellingnotably number three laconically called ''Of Sightseeing,'' and number four, named with similar brevity, ''Of a Lesson.'' They are worth noting down provided you care for the French school of story-writing and are glad to see something of the kind occasionally done with real ability in English. But there are so many English readers who do not care even for the finished art of the French short story that it seems better, instead of analyzing any of these very truthful and sincere and incisive stories, to condense one of Helen Mackay's shorter sketches or verbal etchingsindeed, one hardly knows how to designate them; the author herself has found no better title for the group than ''Thirteen Little Things.'' The first of these ''Thirteen Little Things'' deals with a certain old gargoyle high up on the roof of Notre Dame which a little old woman living in the church's shadow christened The Thinker. She was, says the author, a fat, jolly old woman, the last in the world you would suspect of having fancies, and yet this is what she said:

''That The Thinker had been looking down on Paris for some hundreds of years, she was not at all clear as to how many; and the thinking about it all silently for so long had given its face the expression of all the city's moods, so that he was become himself an expression of it, and his face was the face of Paris.''

She talks often, the author goes on to say, of what she saw in the face of The Thinker, ''all the while doing some comfortable, homely, pleasant thing about the little room, coaxing the fire, making the coffee, mending the things of her old man, le Vieux, or knitting tiny white socks for her newest grandchild.'' There was one look in especial, she used to say, of all the others in the face of The Thinker that made her love him. But for a long time she would not tell what that look was. ''You would laugh,'' she said.

''When she knew me better, and trusted more to my not laughing, she told me she thought that to the face of The Thinker had come with years through all the mockery and cynicism, a great wistfulness. She said that the wistfulness she saw in his face came from looking beyond; that it was the wistfulness of every one who looked beyond. She said that the old gray gargoyle up there could see far enough, over the river and the streets, to get a glimpse of something that was beyond all the cold and dark forgetting, all the going and coming in the noise and dust, and yet he could not see far enough to know what that something was.

''What do you suppose it is?'' I used to say to the little old woman.

Perhaps she was threading her needle, or perhaps she was leaning over the fire as she made coffee. She never looked at me as she answered:

''How should I know, I? And what imports it? It does not matter what is the far thing one longs for, there in the beyond, only that there is the longing.''