I Don't Want To Be A Frog 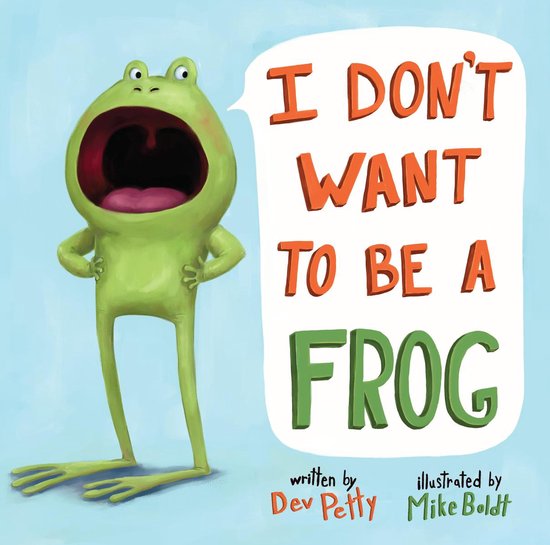 The hit book about a willful young frog with a serious identity crisis and his heard-it-all-before father. Perfect for fans of Mo Willems&;s Don&;t Let the Pigeon Drive the Bus! and Jon Klassen&;s I Want My Hat Back!

Frog wants to be anything but a slimy, wet frog. A cat, perhaps. Or a rabbit. An owl? But when a hungry wolf arrives&;a wolf who HATES eating frogs&;our hero decides that being himself isn&;t so bad after all. In this very silly story with a sly message, told in hilarious dialogue between a feisty young frog and his heard-it-all-before father, young readers will identify with little Frog&;s desire to be something different, while laughing along at his stubborn yet endearing schemes to prove himself right.

&; ''First-time author Petty&;s dialogue between a frog father and his son makes its point about accepting one&;s nature with a big grin. . . . The story might create similar gratitude in the minds of readers&;or it might just make them giggle.''&;Publishers Weekly, STARRED REVIEW

''A lively look at self-acceptance.''&;Kirkus Reviews

''This amusing story ends with a laugh and a much more content frog.''&;School Library Journal

''Silliness and deadpan humor combine into a hopping good story of being happy with who you are.''&;Booklist

''Petty and Boldt provide just enough predictability to hook youngest readers, then deliver a delightful twist or two to create surprise and satisfaction&;for both the green hero and the many fans he'll make with this book.''&;Shelf Awareness

''This lighthearted exploration of identity will delight as a readaloud.''&;The Bulletin of the Center for Children's Books
Toon meer Toon minder