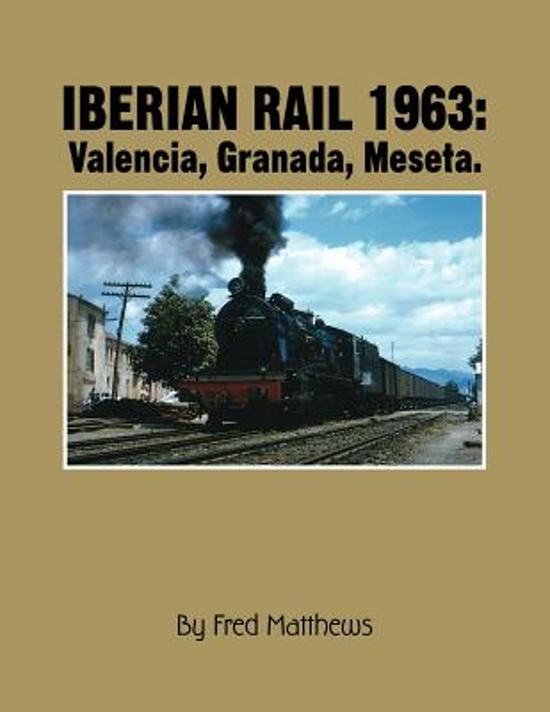 This is the second part of a survey of Iberian railways and tramways in 1963, when the author and his friend Larry Veysey and I made a long circular tour of the Peninsula. In 1963 the traditional tramways were large and busy, though already in the sights of modernizing bureaucrats. The broad-gauge national RENFE and most independent railways were still largely powered by steam; many passengers rode in wood-bodied coaches. Much of the railway scene was comparable to that of North America around 1910. Volume I covered the railways and tramways of Catalonia. Here we make a loop south along the Mediterranean Coast to Valencia and Alicante, inland to Granada, and north via Madrid and Leon to the Costa Verde along the bay of Biscay. The RENFE (Red National des Ferrocariles Espagnoles) is a government owned system created in 1941 to consolidate four major and some minor broad-gauge companies left without reconstruction funds at the end of the bloody, destructive Civil War in 1939. Despite inheriting a broken and bankrupt group of companies, RENFE had little new funding until the late 1940s, except for necessary repairs and replacements. Spain was struggling with savage domestic repression, then ostracism and isolation by the victorious democratic powers after Generalissimo Franco's Axis friends were finally defeated in 1945. While certainly the largest, longest, and loudest, the RENFE was only one (very large) part of the overall rail scene in 1963. Spanish governments over the years between 1875 and 1930 had encouraged a flowering of narrow-gauge lines to open up the rich but usually-impoverished country away from the coasts and Madrid-centred main lines. Most of these were metre-gaugerailways, but there were still some of the 75cm (2'5") gauge toy trains, like the charming El Parderole, the FC Onda y Castelln, which opens this volume. We continue south to Spain's fascinating third city, Valencia, where a carnival of steam activity centered on the grand Norte Station (then called Termino). The Mediterranean from Valencia to Alicante enjoyed three separate metre-gauge lines plus two tramways, and RENFE super-power tackling steep mountain grades. Then on to Granada on a vintage train and track preserved in aspic from the 1910s. More trams in Granada and Madrid, plus main-line steam action. We ended in Leon and Asturias, where industrial narrow-gauge lines were in their last burst of steam action. It was a wonderful, if exhausting, trip, recreated here in vivid color photos and extensive explanatory text.
Toon meer Toon minder