Imagination and the University 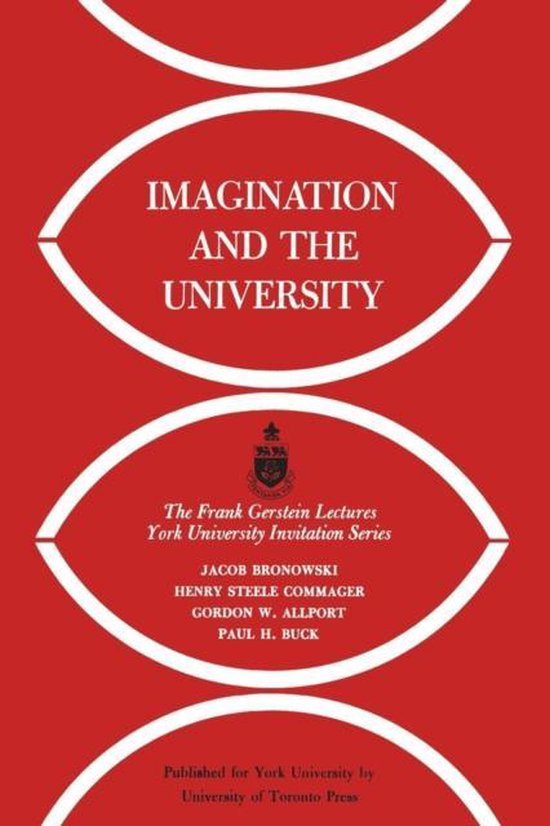 This volume, the Frank Gerstein Lectures for 1963, is the second series of Invitation Lectures to be delivered at York University. The theme Imagination and the University was appropriate for, as President Murray Ross states in this Foreword, it is in its early years that a university is sufficiently flexible to utilize imagination in its structure and in its curriculum. York University was in its third year when the Lectures were given. Four distinguished scholars present their views on the importance of an imaginative approach to the different academic disciplines, and to the conduct of life in contemporary society as a whole. Jacob Bronowski, speaking on Imagination in Art and Science, draws a clear and striking analogy between the role of imagination in mathematics and in poetry, drawing on his own experiences and contributions in both areas. He stresses that all creative works in art or science, must conform to the universal experience of mankind and to the private experiences of each man: the work of science, as of art, moves us profoundly, in mind and in emotion, when it matches our experience and at the same time points beyond it. Henry Steele Commager shows how important is the contribution to be made by an imaginative approach to politics, where, as in other fields of human experience, it must not be separated from reality, if it is to find expression in something more than words. He points to examples from the past and the present and asks for more imagination in public thinking, it fit our actions to the reality of change, citing the urgency of such twentieth-century phenomena as the status of Communist China, the predicted population explosion, and the threat of nuclear war. Professor Commager believes that the universities provide the key to this kind of approach, being a supreme example of the creative capacity of mankind, whose function it is to serve the commonwealth of learning. A different kind of insight is offered by Gordon W. Allport, whose subject is Imagination in Psychology. He believes that the present impertinence of psychology can best be cured by endowing it with more imagination. He demands a pluralistic approach to psychological investigation, which would not deny the insights yielded by traditional methods, with their characteristic minute analyses, but whose goal would be to fashion a conception of the human person that would exclude nothing that is valid, and at the same time preserve an ideal of rational consistency. This could lead, in turn, to a clear definition of the root motives of mankind, even to discovering new formulas for international peace by offsetting particularistic political demands. Finally, Paul H. Buck describes the Harvard House Plan as an example of Imagination and the Curriculum. This plan, modelled on the Oxford-Cambridge College system which is also followed in some Canadian universities, is an attempt to make all aspects of undergraduate life a process of education. And a truly liberal education for today and tomorrow, Professor Buck is confident, will combine a programme of general education, a programme of specialism, and a collegiate way of living.
Toon meer Toon minder