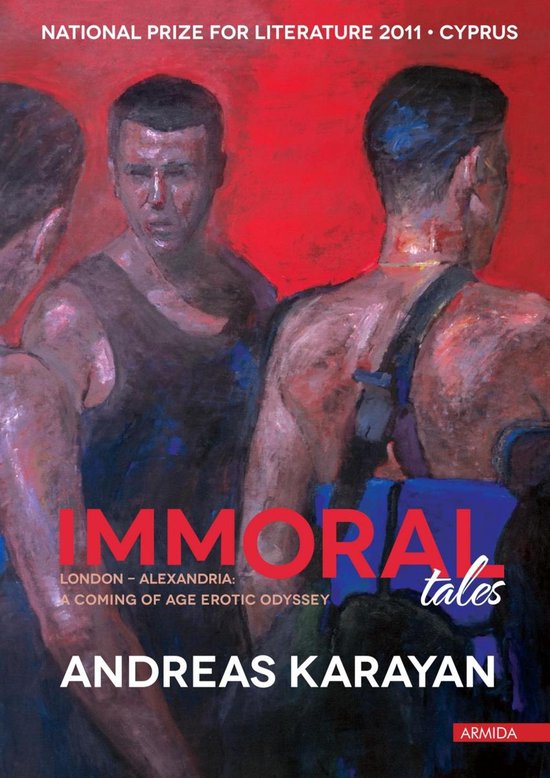 
In the age of David Hockney, Derek Jarman, Kenneth Anger and Andy Warhol, when bisexuality was at first radical and then trendy, a young man is faced with the ambiguity of sexual roles and oscillates between In the Shadow of Young Girls in Flower and Special Friendships.


A frank and moving coming of age autobiographical novel about self discovery, love, art, sexual and artistic identity. A journey leading from the swinging London of the late '60s to contemporary Alexandria.


IMMORAL TALES is one part of a semi-autobiographical trilogy, but it is autonomous; it follows a young man's search for his artistic and sexual identity during his formative years.


Art and passion converge in Andreas Karayan's cosmopolitan gaze. His trilogy explores key historical, political and social events which have shaped contemporary Europe, as the backdrop for both the life of his protagonist and his own. More specifically, "Immoral Tales: London – Alexandria," Karayan explores the world-changing events of late 60's and early 70's in London, and how they influenced his decision to abandon medicine for the arts. The second part of the book explores the pre-revolutionary contemporary Alexandria.


The first of the genre in this part of the world, the book fosters a better understanding of art and sexuality, while emphasizing LGBT and other human rights issues. It is considered a landmark in Cyprus, since it is the first to explore themes which were previously considered taboo.


Grounds for the Literary Award

The book is a candid look at the life of the author, in the form of an autobiographical novel. Through a patchwork of images, Andreas Karayan succeeds with real verve and sensibility in describing the conflicting attractions of his body and soul. The book is a profound self-examination, which blends organically place and time, conveying their atmosphere elegantly with a disarming sincerity. It is in essence a bold attempt to seek identity without the author resorting to self-censorship. On the contrary, he unveils himself and his conflicts finding in the process of writing wholeness, in the interaction of art and life. The writer swathes the facts of his life in a poetic myth and successfully sketches characters who, with their individuality, are in the end transformed into dramatis personae. The whole is presented in an airy manner, with a sense of humor and self-mockery, but also with rich cultural references which bear witness to a good education.

Andreas Karayan was born in Nicosia, Cyprus, in 1943. He is a well-known Cypriot artist and a pioneer of LGBT rights in Cyprus through his paintings, writings and actions. He studied medicine at the University of Athens and graduated in 1967. He moved to London where he was seduced by the atmosphere of the late '60s and abandoned medicine in favor of art, studying at the Central and Camberwell Schools of Art. He then took an engraving course in Germany and lived in Berlin for a considerable time. He represented Cyprus at the Venice Biennale in 2001, and at the Cairo Biennale in 2006. He also illustrated poems of K. P. Cavafy, which were published in Berlin. From 1978 to 2004, he involved himself with journalism, theatre and cinema criticism. After an invitation from the Library of Alexandria in 2007, he lived in the city and produced a series of works on Alexandrian themes, which were exhibited at the Library. He is the author of three novels in Greek ("A true tale", "Immoral Tales", and "Dark Tales"). Nowadays, he lives and works in Nicosia, Alexandria, and Athens.