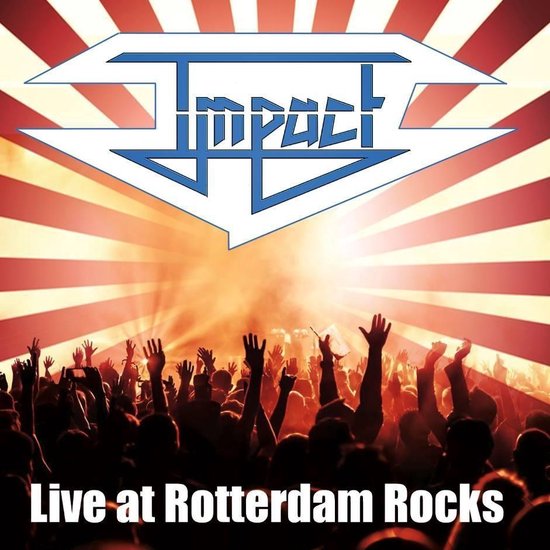 IMPACT was formed in 1981 by lead singer Thierry Plisson. At that time, there were only a handful of Hard Rock bands in The Netherlands, such as Highway Chile, Picture and Bodine.

Due to their open song structure and sophisticated sound, combined with a raw but unique voice, things evolved fast. In 1982, they were asked by the prestigious Aardschok magazine to feature on their Metal Clogs compilation album with 3 songs, including “Misanthrope” and “Looking for Trouble”.

Due to this success, IMPACT was touring intensively in the Dutch Hard Rock clubs for years in a row. Because of the showmanship of the frontman, live shows turned into a real party experience, with the audience go wild, banging their heads and jumping from stages.

To prepare for the upcoming album, the band acquired a rehearsal space in the attic of a church in Rotterdam. With the go-ahead of the priest himself, since the lyrics were about politics and daily situations, unlike the blasphemy of other bands in this genre.

In 1987, the second full-length album The Flag saw daylight, including the songs “No Sleep”, “The Symbol of the Flag” and “Eat Your Heart Out”.

In the nineties, rough times followed, due to the upcoming of the Grunge scene. Nevertheless, the band was asked to provide two songs for the compilation album Metal Trax, Including “The Writing on the Wall”.

At this point, Thierry decided to put the band on a hold for a long time, and all members went separate ways. Only in 2009, IMPACT did a new attempt with the full-length album The Calm before the Storm. Although never officially released, this album turned out heavier in style, as heard in songs like “On the Rampage”.

Fast forward to 2013. IMPACT regained many new followers after releasing the Youtube single “You and I”, an emotional semi-ballad. This song featured a more modern and melodic direction, with honest vocals. Furthermore, the band was asked by well-known music journalist Robert Haagsma to contribute to the “Dutch Steel” compilation album. This album is considered as a valuable piece for fans of Dutch 80’s Hard Rock.

In 2016, IMPACT was persuaded to do a reunion concert, which would be their first live show in years! It only took two rehearsal to prepare (this was possible due to musician’s experience in later bands) and the band looked to this upcoming show with no high expectations. If all, it should be a party and it should be fun for old and new fans. Eventually, this event took place on the Rotterdam Rocks festival, with songs from all eras. Because of the ‘newness’, the band sounded extremely enthusiastic and fresh. Audio recordings of this show turned out so good, that Thierry decided to release it as a Live Album.

And now, IMPACT is back and proudly presents… Live at Rotterdam Rocks!! Mixed by Hans Pieters (Helloise, After Forever, Thanatos, Epica) and released by Headbangers Records. Containing well-known songs like “Misanthrope”, “Symbol of the Flag” and the classic “Never Too Young to Rock”!