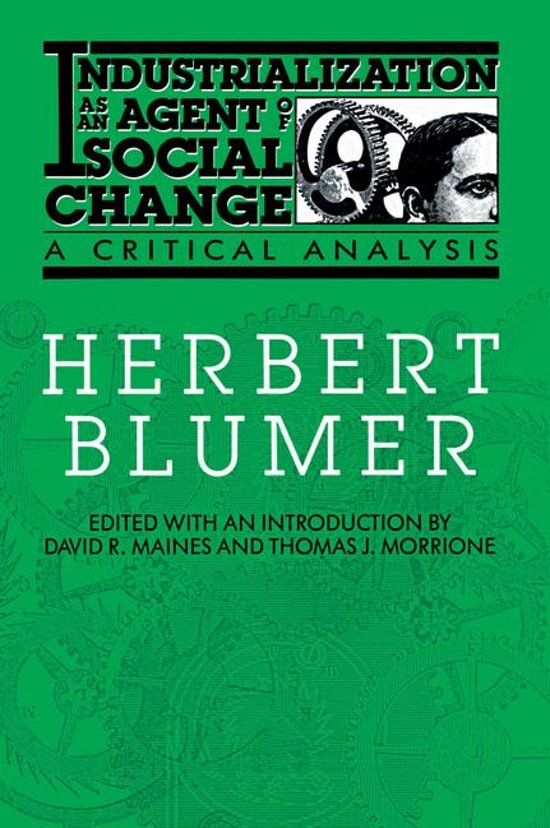 Herbert Blumer wrote continuously and voluminously, and consequently left a vast array of unpublished work at the time of his death in 1987. This posthumously published volume testifies further to his perceptive analysis of large-scale social organizations and elegant application of symbolic interactionist principles.Blumer's focus on the processual nature of social life and on the significance of the communicative interpretation of social contexts is manifest in his theory of industrialization and social change. His theory entails three major points: industrialization must be seen in processual terms, and the industrialization process is different for different historical periods; the consequences of industrialization are a function of the interpretive nature of human action and resembles a neutral framework within which groups interpret the meaning of industrial relations, and the industrial sector must be viewed in terms of power relations; industrial societies contain inherently conflicting interests.The editors' introductory essay outlines Blumer's metatheoretical stance (symbolic interactionism) and its emphasis on the adjustive character of social life. It places Blumer's theory in the context of contemporary macro theory, including world systems theory, resource dependence theory, and modernization theory.
Toon meer Toon minder

-A posthumous publication of a study Blumer most likely began in 1959. The book does much to clarify and enhance Blumer's legacy, and the editors' introductory essay is most useful in establishing Blumer's monograph in its appropriate intellectual context. At a general level, the book provides a strong demonstration of how Blumer's symbolic interactionism can be successfully applied to the analysis of social structural phenomena. More substantively, the work gives an extended, clear, and definitive statement of what industrialization does and does not include. Although industrialization is an indisputable agent of social change, Blumer argues that industrialization is -indeterminate or neutral with regard to what happens in its wake-... As usual, Blumer's writing style is exceptionally clear and flowing as he systematically constructs his arguments in a classic essay style.- --W. P. Nye, Choice
Toon meer Toon minder