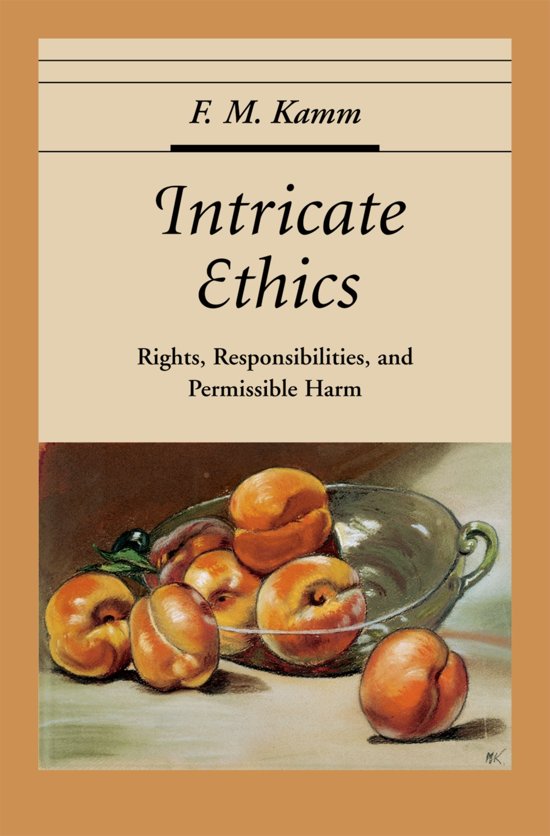 ''Reading F.M. Kamm's latest book is like watching a brilliant astronomer map an uncharted galaxy--the meticulousness and the display of mental stamina must inspire awe. There is a kind of beauty in the performance alone. Intricate Ethics is a major event in normative ethical theory by a living master of the subject.... In the end, professional moral philosophers cannot reasonably ignore Intricate Ethics.... Kamm continues to prove herself the most imaginative, detail-oriented deontologist writing in English today... Professor Kamm is in a class by herself.''--Jeffrey Brand-Ballard, Notre Dame Philosophical Reviews ''The operative word in this masterful work is 'intricate.' Watching Kamm's mind dissect and reconstruct different cases is like watching a juggler, riding a unicycle, carrying on a conversation, while getting dressed. It is a glorious celebration of what moral philosophy does best, and what one of its most gifted practitioners can do to enlighten our understanding of the most pressing ethical issues of our time. But it is also a rich playground for empirically minded philosophers and psychologists who want to play with the clever class of dilemmas that Kamm has created, dilemmas that will both amuse and torture generations of people.''--Marc Hauser is a Harvard College Professor and author of ''Moral Minds'' ''Frances Kamm once again proves herself to be an astonishingly subtle and creative defender of a deontological outlook. Anyone at all interested in normative ethics will find something of value in Intricate Ethics. There are striking and original views on a wide range of topics. And no one--absolutely no one--compares to Kamm when it comes to constructing relevant test cases and carefully assessing our intuitive reactions to them. This is a master at work, at the height of her powers.''--Shelly Kagan, Clark Professor of Philosophy, Yale University ''Intricate Ethics fully justifies its title. It is as deep, subtle, imaginative, and analytically rigorous as any work in moral philosophy written in a great many years. It is dense with highly original and fertile ideas supported by powerful and ingenious arguments. This book amply confirms Frances Kamm's standing as one of the greatest living philosophers.--Jeff McMahan, Rutgers University ''Kamm's virtuosity in hypothesizing cases in defense or refutation of moral principles remains unsurpassed. Intricate Ethics is also a testament to the fruitfulness of this rarefied method of ethics. One might have thought that, having already devoted several hundred path-breaking pages to the topic of nonconsequentialism in her earlier two-volume Morality, Mortality, it would have been impossible to break much new ground in this sequel. Yet what Kamm has to say here on the topics of harming and saving from harm is as novel, arresting, and insightful as ever.''--Michael Otsuka, Professor of Philosophy, University College London ''Kamm ...is the most sophisticated of the contemporary exponents of ''intuitionist'' or ''nonconsequentialist'' ethics...No one else makes such extraordinarily meticulous and penetrating attempts to extract the principles behind our ordinary moral intuitions...I highly recommend it as an inclusive and subtle attempt to work out nonconsequentialism on an intuitionist basis. As a bonus, Intricate Ethics also offers searching analyses of the work of Peter Unger, Peter Singer, Bernard Gert, T.M. Scanlon, Daniel Kahneman and Amos Tversky.''--Ingmar Persson, Times Literary Supplement

This is a fascinating book, with insightful discussions of a wide range of philosophical topics and contemporary philosophers. All philosophers will gain from reading it. * Bernard Gert, Utilitas * In the end, professional moral philosophers cannot reasonably ignore Intricate Ethics...Kamm continues to prove herself the most imaginative, detail-oriented deontologist writing in English today...Professor Kamm is in a class by herself. * Jeffrey Brand-Ballard, Notre Dame Philosophical Review. * [Kamm] is the most sophisticated of the contemporary exponents of intuitionist or non-consequentalist ethics... No one makes such extraordinarily meticulous and penetrating attempts to extract the principles behind our ordinary moral intuitions... I highly recomment it as an inclusive and subtle attempt to work out non-consequentialism on an intuitionist basis. * Ingmar Persson, Times Literary Supplement * ...an impressive and important book. * Rob Lawlor Mind Vol 118 Oct 2009 *
Toon meer Toon minder