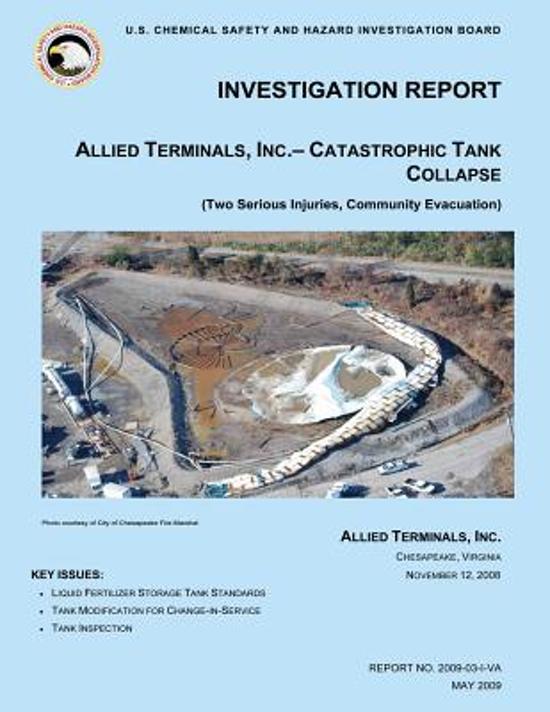 On November 12, 2008, a 2-million-gallon liquid fertilizer tank (designated as Tank 201 by the owner) catastrophically failed at the Allied Terminals, Inc. (Allied) facility in Chesapeake, Virginia, seriously injuring two workers and partially flooding an adjacent residential neighborhood. On the day of the incident, Allied was filling Tank 201 with liquid fertilizer to check for leaks prior to painting the tank. During the filling, a welder and his helper sealed leaking rivets on the tank. At a fill level about 3.5 inches below the calculated maximum liquid level, the tank split apart vertically, beginning at a defective weld located midway up the tank. Within seconds, the liquid fertilizer overtopped the secondary containment, partially flooding the site and adjacent neighborhood. The collapsing tank wall injured the welder and his helper, who were working on the tank. Employees of a neighboring business responded and extricated them. At least 200,000 gallons of the liquid fertilizer were not recovered; some entered the southern branch of the Elizabeth River. The CSB identified the following causes: 1. Allied did not ensure that welds on the plates to replace the vertical riveted joints met generally accepted industry quality standards for tank fabrication. 2. Allied had not performed post-welding inspection (spot radiography) required for the calculated maximum liquid level for the tank. 3. Allied had no safety procedures or policies for work on or around tanks that were being filled for the first time following major modifications and directed contractors to seal leaking rivets while Tank 201 was being filled to the calculated maximum liquid level for the first time.
Toon meer Toon minder