IRA The Woman Who Fathered, Mentored, and Provided for 7+ Children in Tough Times 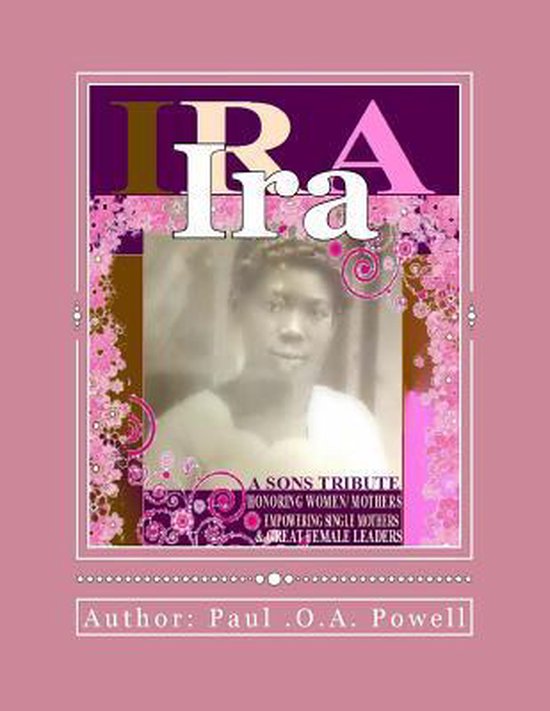 IRA is a sons's tribute to a great mother. IRA highlights women on the front-line who plays the role of a mother and a father, and does whatever she needs to on a daily basis, to pay the rent and provide food including clothing for her children. The book highlights the way women were treated in the 13th and 17th century compared to today. The book highlights the first woman who became a prime minister in 1960, and the contribution she made that changed history forever.IRA the book, highlights the struggle of American women to receive equal pay and benefits for the same work done as men. The book emphasized that America is on the brink of change and history in the making, as the presumptive soon to be nominated presidential candidate Hillary Diane Rodham Clinton, will become madam president and leader of the free world. The book empowers women, praise mothers, and thank them with a poem from the bottom of a son's heart, who's mother Mrs.Genita Estriana Powell, 'IRA', has left an honorable and lasting legacy through her children. IRA speaks for women who deer to dream; whom have fallen, to get up dust them selves off, and keep fighting independently for their child or children. IRA puts women on the alert, to be aware of men, who will say anything to rob or swindle them, of every dime they possesses. It will further devastate the children's well-being, and leads to further calamities and dilemma. IRA teaches women to share valuable information with their eldest child or the one who understands the most. It teaches them as women, to protect their finances, and if they happens to get a large some of money, let there be more than one signers on the account, to prevent easy access or all the power to withdraw at free will.This book will put women on the edge concerning lending money to their relatives and making investments for them, who will not pay it back, after many sobbing and faithful promises. The book reminds mothers/women of how evil the world is, and because of envy and hatred, neighbors can choose to attack, assets and resources, such as business and children.IRA reminds women that, in-spite of it all, you should do good to others as you would want for your self. This book assures the penalty or consequences that will be initiated in the life of an evil doer. Some say it's Karma, but scriptures says,''Every man shall be paid according to their own deeds''. After a mother has toiled and work hard for her children, even if she did not enjoy the benefits as she would have hoped, her children or child, will reap the reward. IRA helps to ease the griefs or pain, of a love one, that you thought did not get to fulfill their dreams, before they went to the other side. It helps you to optimistically believe that indeed that person did it. It requires you to encourage their children to rise to the challenge, and graduate high school, or go to college in honor of that love one. It will indeed work out better for them in the long run, as they keep that person memory alive. IRA is a life changer, and a single mother motivator.
Toon meer Toon minder