Is Postcolonial Theory Bla-Boring? a Return to Primary Texts. Selections from the Writings of Raja Rammohun Roy (1772-1833). 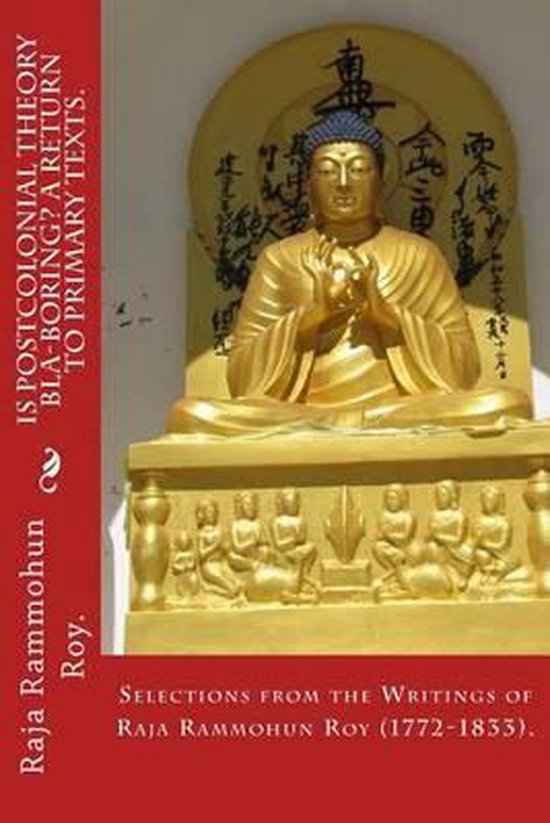 A central premise of postcolonial theory is that native cultures were completely overwritten by colonial presence, and that European colonizers dictated terms which left little space for natives to maneuver their positions and identities What we forget is that the natives were negotiating with the European Other, and simultaneously re-examining and rewriting their own epistemic systems. Reading primary texts written by natives allows us a completely different perspective on how colonization took place in the last few centuries. Even if we agree that the hegemonic center had cultural supremacy in dictating terms on how the natives were to be portrayed to the world, it would be foolish to assume that the natives were silent spectators. They might have been peripheral in relation to the West, at that moment, but they were quite central within a Self-native perspective. The question therefore is, why should we, at this moment, care as to how the colonizers perceived the natives and instead, our focus should be on how the natives perceived the Self and the colonizer-Other, and in the process, renegotiated with identities of the Self. One way of doing so would be by examining primary texts and literary works that were written during this time period. And it is keeping this perspective in mind that we examine the writings of Raja Rammohun Roy and his use of the newly emerged realm of print in colonial Calcutta in the early decades of the nineteenth century; doing so will allow us to conclude that postcolonial theory, as a valid analytical tool, is defunct. In many ways, what distinguishes Rammohun from his native contemporaries, who also were participating in the newly established realm of print, is his hyper-critical awareness of the characteristics of print-that mechanically reproduced printed texts could reach across to a large reading audience. Rammohun was fond of print to the point where whatever he thought about and wanted to do found its way into print. Even his theological and social disputes were worked out in print. He reveled in print, dashing off pamphlets to the printers. He enjoyed the publicity that his printed works gave him, by reaching a local and a global readership. The realm of English native print in Calcutta in the early nineteenth century was dominated by the writings of Rammohun Roy, but how was it possible for Rammohun to operate within the newly formed communications circuit that specifically targeted the native readers? How did printing take place in Calcutta, and who were involved? We have a hazy picture of the early years of the "communication circuit" that emerged in Calcutta in the 1780s. We find Hindu natives rubbing shoulders with the Europeans as they joined labor in setting up print foundries and presses, and a new city was established with all the paraphernalia of European civilization-many natives were going to eventually be "suited" and "booted." Ships arrived at the docks loaded with books, consumer items for the colonizers, and a whole lot of material for printing presses; it also came loaded with men who brought intellectual labour. Alongside Hindu and Islamic cultures, a new civilization emerged in India. How do we account for this degree of pluralism and multi-culturalism? EXTRACTS FROM THE BRAHMANICAL MAGAZINE (1821). It is well-known to the whole world, that no people on earth are more tolerant than the Hindoos, who believe all men to be equally within the reach of Divine beneficence, which embraces the good of every religious sect and denomination: therefore it cannot be imagined that my object in publishing this Magazine was to oppose Christianity; but I was influenced by the conviction that persons who travel to a distant country for the purpose of overturning the opinions of its inhabitants and introducing their own, ought to be prepared to demonstrate that the latter are more reasonable than the former.
Toon meer Toon minder