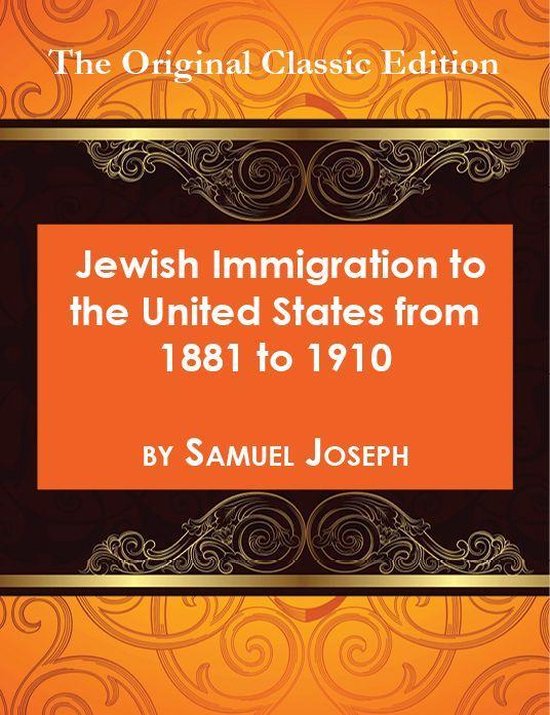 This is a high quality book of the original classic edition. It was previously published by other bona fide publishers, and is now, finally, back in print.


Enjoy this classic work. These few paragraphs distill the contents and gives you a short overview and insight of this work and the author's style:


As these conditions and transformations furnish the foundation of Jewish life in Eastern Europe, and contain the explanation of the situation that has been largely responsible for the recent Jewish emigration to Western Europe and the United States, a rapid review of the economic, social and political conditions of Russia, Roumania and Austria-Hungary will be made.


...His method of extensive cultivation, the three-field system in vogue, his primitive implements, his domestic economy of half a century ago, with its home production for home consumption, which is still maintained in many parts of Russia to this day-all these present conditions not far removed from those of the middle ages of Western Europe.[


...Nevertheless, in its large agricultural population, in the primitive system of cultivation generally in vogue, in the scattered character of the peasant holdings, in the strong contrast between the great landed estates or Latifundia, held chiefly by the nobility, and the small, even minute, estates of the majority of the peasant proprietors, and in the natural economy prevailing in many parts of the Dual Monarchy and constituting the main foundation upon which the life of the peasants rests-in all these characteristics, is reflected the almost medieval economy which existed in the empire before 1848 and which is not yet entirely outgrown.


...Against them were arrayed the powerful forces of the agrarian party or the landed aristocracy-the upholders of the feudal economic-social order of privilege and class distinction, the clericals-the upholders of the idea of the Christian State-and the representatives of the lower middle class, composed chiefly of petty artisans and traders, whose ideal was the medieval industrial organization, largely co-operative and regulated, as opposed to the individualistic and competitive system of the modern era, with its great concentration of wealth, capital and power in the hands of the middle class. That the present structure of Austria is so much of a compromise and crosspatch between modern and medieval economic, social and political forms, and contains so much that is essentially incongruous, is due largely to the successful struggle which the chief parties of the medieval order-the feudal-clericals-the party of the upper classes, and the Christian Socialists-the party of the lower classes-have waged against the growing constitutionalization, industrialization and secularization of Austria-in short, against the transformation of Austria into a modern state.