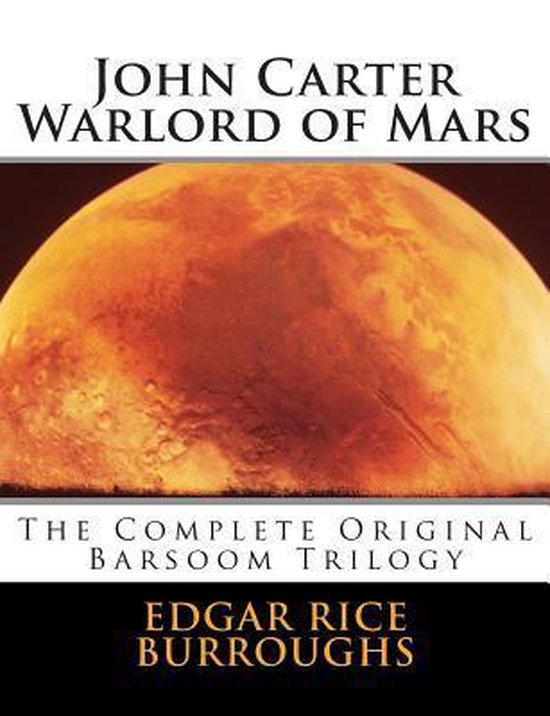 This collector-quality edition includes the complete text of the first three novels of Edgar Rice Burrough's "Barsoom" series, "A Princess of Mars", "The Gods of Mars" and "Warlord of Mars" in freshly edited and newly typeset editions. With an oversize 7.44"x9.69" page size, this Summit Classic edition is printed on hefty 60# bright white paper with a fully laminated cover featuring an original full color design. "Barsoom" is the native name for the Mars imagined by Edgar Rice Burroughs, a dying world whose oceans have gone dry and whose atmosphere is dissipating, precariously maintained by a massive atmosphere plant, a world where a race of giant green men with four arms roam dry seabeds and vast ancient ruins mounted on reptilian steeds, while a race of coppery-skinned red men maintains an oddly barbaric culture and scientific civilization in sprawling cities and travel in flying cars. If any of this sounds vaguely familiar but you've never read what has over the years become known as Edgar Rice Burroughs' science fiction "Martian series" it's not surprising. Burroughs didn't "invent" planetary romance, lost civilizations, islands populated by dinosaurs and primitive men or any of the kinds of fiction he wrote. But he literally re-invented adventure fiction across the board and his indelible stamp on the work of writers, filmmakers, television producers and scientists is still apparent a hundred years after his first published story.Burroughs is known the world over as the creator of Tarzan, the Ape Man. Tarzan became a cultural phenomenon almost immediately upon his appearance, but before Tarzan there was John Carter of Mars. Burroughs' first published work originally appeared in serial form with the title "Under the Moons of Mars" in 1912. Like many of Burroughs' pulp magazine serials, the story was later published in book form by Chicago publisher A. C. McClurg. The original McClurg version re-titled the story as "A Princess of Mars," the name by which it has been known ever since.There would ultimately be eleven "Martian Novels", with the cast of characters changing as the series progressed. The first three stories form a cohesive trilogy, the romance between John Carter, mysteriously transported to Mars from the Arizona desert, and Dejah Thoris, the "Princess of Mars" for whom the first novel is named. These three tales are presented in this volume. In Edgar Rice Burroughs' trademark style, John Carter is thrown into a series of non-stop adventures at breakneck pace, with the earthling pitted against a variety of Martian men and beasts, finding adversaries on seemingly every page and finding a few friends - and the love of his life - in the course of this epic adventure that will ultimately leave him astride a fantastic planet. Additional material collected and presented for Burroughs' fans, new or old, are a biographical sketch of the author and a detailed bibliography of his work.
Toon meer Toon minder