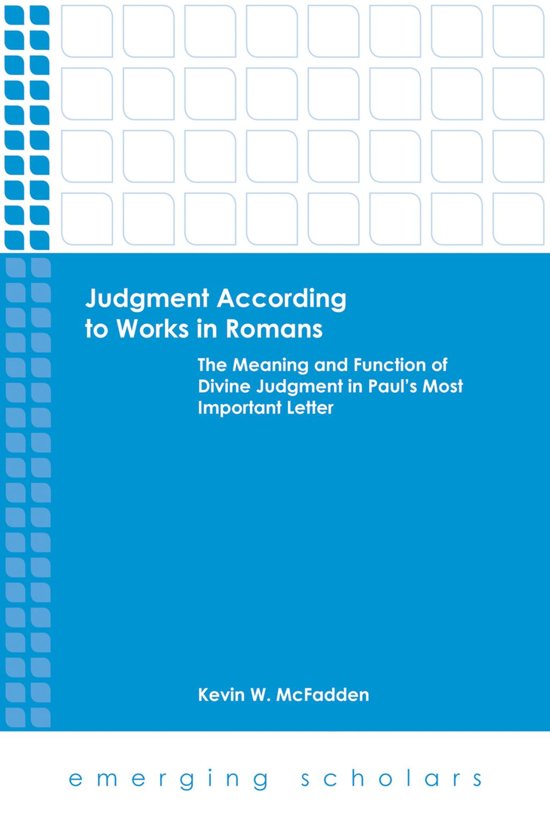 Giving careful exegetical attention to Paul's letter to the Romans, Kevin W. McFadden shows that Paul wrote the letter to remind Roman Christians of his gospel because of his vocation as apostle to the Gentiles. The letter simultaneously demonstrates the guilt of the world and calls Paul's audience to live out the implications of the gospel. The theme of judgment thus appears in two distinct ways. Paul opposes justification by works of law, but simultaneously affirms––as did most of the early Christian movement, McFadden argues––a final judgment according to works. These are not contradictory observations but belong together in a cohesive understanding of Paul's theology and of his purpose in the letter. McFadden turns at last to the implications of his study for a reassessment of Protestant interpretation of Paul, and of the present impasse in interpretation caused by hasty or inexact generalizations made within the "New Perspective."

This book, which is carefully written and carefully argued, reminds us of the complexity of Paul's theology of salvation and all aspects of it, including justification. Justification does not nullify the reality of God's judgment on sin. Kevin McFadden deals with this controverted area and its secondary literature with precision, skill, and evenhandedness. Frank W. Hughes Diocesan School of Theology Episcopal Diocese of Western Louisiana The topic of judgment according to works is a vital but often neglected aspect of Paul's theology. Kevin McFadden's study of this theme in Romans usefully assesses current options and argues an exegetically informed and theologically sensitive proposal. Douglas J. Moo Wheaton College Looking for a thorough update to the seemingly never-ending debate over Paul's puzzling combination of judgment according to works and justification by faith alone apart from works? Look no further. This is it. McFadden takes on the host of 'new,' 'fresh,' and other perspectives on Paul's soteriology, and argues forcefully that the 'old' ways are more than worthy of another hearing, though with a few new twists of his own. Kent L. Yinger George Fox Evangelical Seminary
Toon meer Toon minder