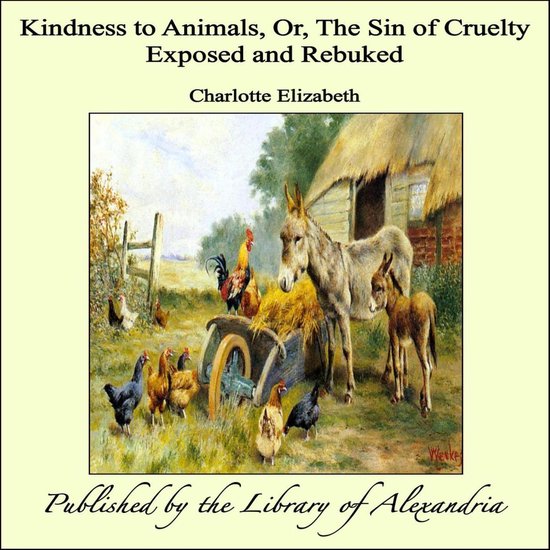 About the Beginning. Many books have been written about animals, and very good books too, giving a great deal of information. Most of them are called works of Natural History; and they usually give some description of the birds and beasts, fishes and insects, that are known to man. I am not going to write such a book as that; but to say a little about different kinds of creatures that we are all in the habit of seeing, and to tell you a few things of some which have belonged to me, or have come under my own observation; so that, at least, I can promise to write nothing but what I know to be true. I have not learned their characters and habits from books, but by watching them ever since I was a very young child; and many a happy hour I have spent in that delightful employment. One of the first things that it came into my little head to ask was, "How were the animals made; and why were any of them made wild and cruel, while some are tame and quiet?" I was told that the Bible gave an answer to that question; and so it does. If we look in the first chapter of Genesis, where there is an account of the creation of the world, we find that on the fifth day God created the fishes to move in the water, and the fowls to fly in the air; and on the sixth day, "God made the beast of the earth after his kind, and cattle after their kind, and every thing that creepeth upon the earth after his kind: and God saw that it was good." From this we learn, that there was no violence or cruelty in any of them, as they first came from the hand of the holy and merciful God. And I would have you take particular notice of what directly follows: "And God said, Let us make man in our image, after our likeness; and let them have dominion over the fish of the sea, and over the fowl of the air, and over the cattle, and over all the earth, and over every creeping thing that creepeth upon the earth." Now, the great God is invisible—a Spirit—and not a body, as I think you all know; and when it is said that God made man in his own image, it must mean that man was made to be holy, and just, and good, and merciful; and he was made to be a careful and loving ruler over the poor dumb creatures, as the Lord God is a careful and loving ruler over all that he has created. Then, in the next chapter, we have a beautiful picture before us: I do not mean a print, or drawing, but a description in words, that, if we think a little, will make us fancy we see a lovely sight, such as we cannot now see anywhere. We are told that out of the ground the Lord God formed every beast of the field, and every fowl of the air; and then that He "brought them unto Adam to see what he would call them: and whatsoever Adam called every living creature, that was the name thereof." Was it not a wonderful and a beautiful sight? There, in a very delicious garden, full of all manner of rich fruit and bright flowers, with soft warm air, and calm sunshine, was the first and only man in all the world! He was righteous and good, without any malice, or cruelty, or covetousness, or pride in his heart, looking with delight upon the creatures that came about him as their rightful ruler, to receive their names