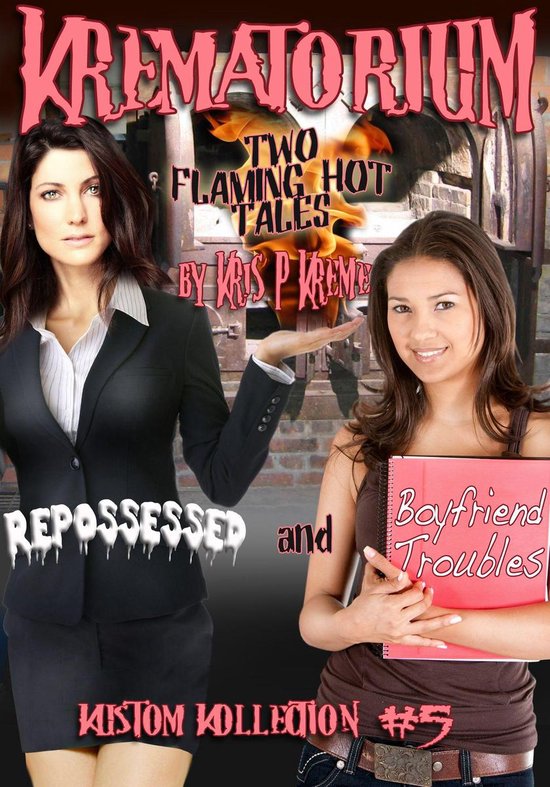 Two more tales custom requested by fans of the Kreme, burning hot right from the Krematorium. You too can have your own place in the Kustom Kollection by kontacting the author with your very own kremey request. Few requests are ever turned down. For this Kollection, enjoy a friendly farmer pushed too far and a girl who attracts the wrong kind of guy, but becomes the right kind of girl.


In Repossessed, meet Charlie, a friendly farmer who's been down on his luck in recent years. Charlie prefers the quiet life, working alone on the family farm after the family has passed on. The main problem in Charlie's simple if somewhat lonely life comes in the form of an overeager young banker named Vivian Grant who has taken over handling properties the bank has extended longterm loans on. She is pushing Charlie more and more, forcing him to make payments faster than any grace period and ultimately pushing for his farm and livestock to be repossessed and sold off for a more profitable gain to the bank.


Charlie has a problem though, one that hasn't acted up since he was a young child. Charlie gets a pounding in his head, a near muscular reflex that always begins with simple agitation and progresses worse with stress. When Vivian Grant comes out to the farm with a real estate agent, Winnie Jarvers, and takes the two sources of Charlie's income, his cows Bessy and Cleo, Charlie is finally pushed too far.


In the end it might just be Vivian and Winnie who find themselves repossessed and serving as replacements for the cows, and friendly farmer Charlie discovers his own ability to possess and embrace the power within as he lives a much less lonely life.


In Boyfriend Troubles we are introduced to a bright young girl with a very responsible attitude, a successful path laid before her, and nothing to stand in her way. Elora is an honor student, taking advanced courses during her senior year of high school. Everything changes on the day a new student transfers in and enters one of her classes.


Something is different about Daman, something Elora notices right away. He seems to instantly be drawn to her and nearly from the first moment they speak, Elora finds life more complicated. Over the weeks and months that follow, Elora slowly begins to embrace the mystery that is Daman, finding herself not just interested in the few things he says he would change about her but eagerly allowing herself to take on those changes.


Grades begin to slip and Elora's focus begins to wane. She goes from bright young girl to dim little slut and in the final months of her senior year everything changes for both Elora and her family. As mother begins acting more docile and accepting of her daughter's new personality, father goes from questioning to supporting her and Daman's plans, plans which ultimately include making sure Elora's body goes through as many changes as her personality has.


Sometimes when a boyfriend enters the picture he brings with him certain troubles, but sometimes the troubles work themselves out and in this case the troubles tell the tale of how you take a smart student and transform her into a bimbo who only exists to be enjoyed.