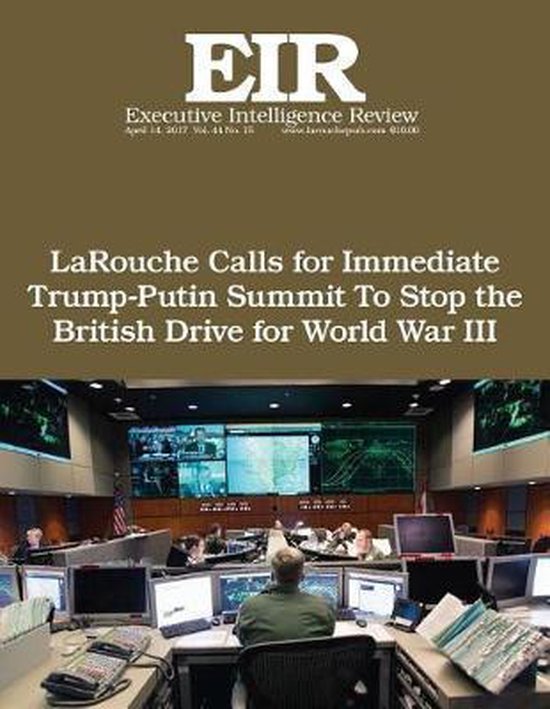 April 9—Lyndon LaRouche today warned that there is a British-run coup d’état in process against the Trump Administration in the United States, which threatens to parlay the stupid and dangerous April 6 air strike against Syria, into a full-fledged thermonuclear confrontation with Russia and China. It’s the British bastards who duped President Trump into attacking Syria, with their lies and false intelligence, LaRouche charged. We have to destroy the British system and all their interests in the United States, he stated. We have to rally the United States to get back on the trajectory that Trump had begun to chart for the country, of cooperation with Russia and China around American System economic policies, including a return to FDR’s 1933 Glass-Steagall principle. Trump and Putin should immediately hold a summit meeting to address the crisis, LaRouche said, and thereby short-circuit the whole British operation. LaRouche strongly endorsed the comments this weekend by veteran German statesman Willy Wimmer, former Secretary of State of the German Defense Ministry, who warned that “people are afraid of a global war, a Third World War,” and argued that “the current dramatic situation offers an opportunity for the Russian and U.S. heads of state to meet as soon as possible.” There can be no doubt that the British are behind last week’s shocking about-face of Trump’s policy. Top British officials are crowing openly over their achievement to date. For example, British Defense Secretary Michael Fallon published an op-ed in the April 9 Sunday Times of London, bragging that “the British and American governments have been in close contact at all levels before and after the strikes. . . . U.S. Defense Secretary Jim Mattis called me to share their assessment of the regime’s culpability. Together we reviewed the options they were considering.” On April 8, British Foreign Secretary Boris Johnson had also claimed that he was coordinating everything with his American counterpart, Secretary of State Rex Tillerson, including Johnson’s theatrical cancellation of his scheduled trip to Moscow. “I discussed these plans in detail with Secretary Tillerson,” Johnson boasted. “He will visit Moscow as planned and, following the G7 meeting [in Lucca, Italy on April 10-April 11], will be able to deliver that clear and coordinated message to the Russians.” Today’s Sunday Times elaborated, in an article accompanying the Fallon op-ed, as to what that message would be: “Britain and America will this week directly accuse Russia of complicity in war crimes in Syria and demand that Vladimir Putin pull the rug from Bashar al-Assad’s blood-soaked regime.” Fallon further wrote: “By proxy, Russia is responsible for every civilian death last week,” adding that Putin must now get with the program, by agreeing to the overthrow of the Assad government.The chances of Putin going along with this British demand, are zero. The chances of the situation spiraling into a thermonuclear confrontation—either in the Middle East or around the Korean Peninsula—are significantly greater than zero, so long as the British are calling the shots. Having induced Trump to attack Syria based upon their lies, the British are now also orchestrating a storm of opposition to President Trump in the Obama wing of the Democratic Party, calling for Trump’s impeachment because of the Syria caper. Trump’s actions this week have also weakened him politically among his own base of supporters, both in the United States and internationally, who are shocked and dismayed at what he did—which adds grist to the British mill.
Toon meer Toon minder