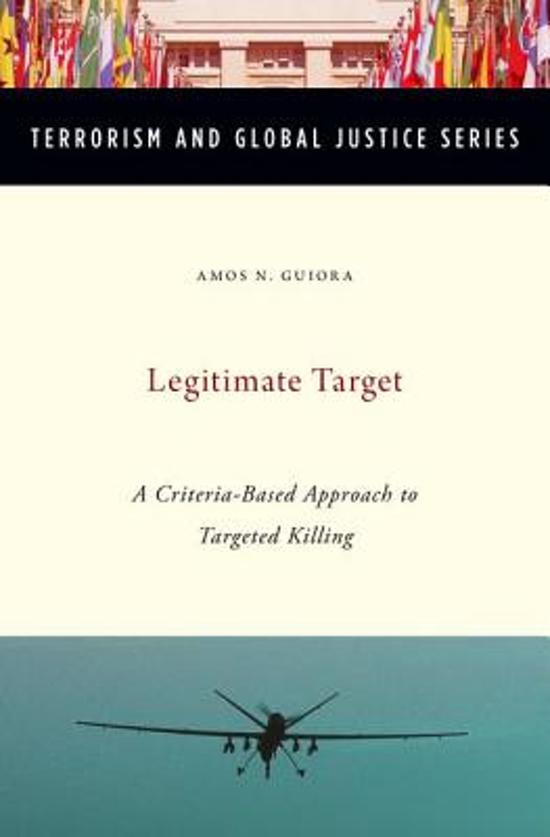 Targeted killings represent both the contemporary weapon of choice and, clearly, the weapon of the future. From the perspective of the nation-state, the benefits of targeted killing are clear: aggressive measures against identified targets can be carried out with minimal, if any, risk to soldiers. But while the threat to soldiers is minimal, there are other risks that must be considered. Particularly, there is a high possibility of collateral damage as well as legitimate concerns regarding how a target is defined. Clearly broad legal, moral, and operational issues are at stake when considering targeted killing.

In Legitimate Target, A Criteria Based Approach to Targeted Killing, Amos Guiora proposes that targeted killing decisions must reflect consideration of four distinct elements: law, policy, morality, and operational details, thus ensuring that it complies with principles of domestic and international laws. The author, writing from both personal experience and an academic perspective, offers important criticism and insight into the policy as presently implemented, highlighting the need for a criteria based decision making process in defining and identifying a legitimate target.Legitimate Target, A Criteria-Based Approach to Targeted Killing blends concrete examples with a nuanced study of the current targeted killing paradigm with an emphasis on the dilemmas of morality and the law.
Toon meer Toon minder

Legitimate Target is a fresh examination of one of today's more difficult law of war issues. Written with insight and directness, the text reflects Professor Guiora's long experience as a military officer, as well as his broad academic background. Few have both the hands-on tactical qualifications and the scholarly expertise to so clearly express the legal, tactical, and moral, conundrums that targeted killing represents. Guiora examines the considerable advantages of targeted killing while recognizing and forthrightly examining its even greater moral and legal dangers. Every reader will find new viewpoints in this well-written examination of a fearful tactic. --Professor Gary Solis, United States Military Academy (Retired) Controversies over the targeted killing of terrorist suspects have been quite persistent, despite the denial by American, Israeli, and other governments that the practice poses any real problem under the laws of war. The great virtue of Amos Guiora's book is that instead of just debating the matter in the abstract, it proposes clear and demanding criteria for the legitimacy of this tactic. Wonderfully informed by the author's own experience in administering such criteria, the book makes a powerful and productive contribution that will help move this debate forward, at the same time deepening and enriching our understanding of the practical issues involved. --Jeremy Waldron, University Professor NYU Law School and Chichele Professor of Social and Political Theory, Oxford Like the question of torture, the policy of targeted killing, based on questionable theories of presidential supremacy wrapped in secrecy, poses fundamental questions of American commitment to long-established principles of international law. Few authoritative commentators have the unique counter-terror operational experience that Professor Guiora, a former IDF legal advisor in Gaza, brings to a critical analysis of how best to formulate a coherent and effective national security strategy that honors the rule of law. --David R. Irvine, Brigadier General, U.S. Army (Retired) One thing for sure is that the question of a legitimate target is infinitely more interesting, and potentially more ethical than the idea of a lawful target. Too often in late-modern war, killing is reduced to a narrow technical legal question, but even legal strikes can be immoral and illegitimate. The concept of legitimacy takes the law into consideration while also leaving space for other considerations: the law, alas, does not exhaust the question. --War, Law & Space Blog In Legitimate Target, author Amos N. Guiora has articulated and defended an impressively nuanced strategy of preemptive self-defense. Although it is always difficult to support any sort of killing as remediation in human affairs, Professor Guiora has managed to do this admirably, effectively, and with commendable erudition. It follows that his latest book, a part of Oxford's Terrorism and Global Justice Series - should now be read with rapt attention and great care, especially in Jerusalem and Washington. --Louis Rene Beres, The Jewish Press This is an important book on a timely and very significant topic. It is not an easy topic. Indeed, targeted killing is rife with complex considerations-practical as well as moral. I trust that each and every one of us has an opinion about the ethics and usefulness of targeted killings. This book provides much food for thought. It should be of interest to academic, judges, army officers, and politicians. --Raphael Cohen-Almagor, Democracy and Security
Toon meer Toon minder