Letters from Wankie A Place in Colonial Africa 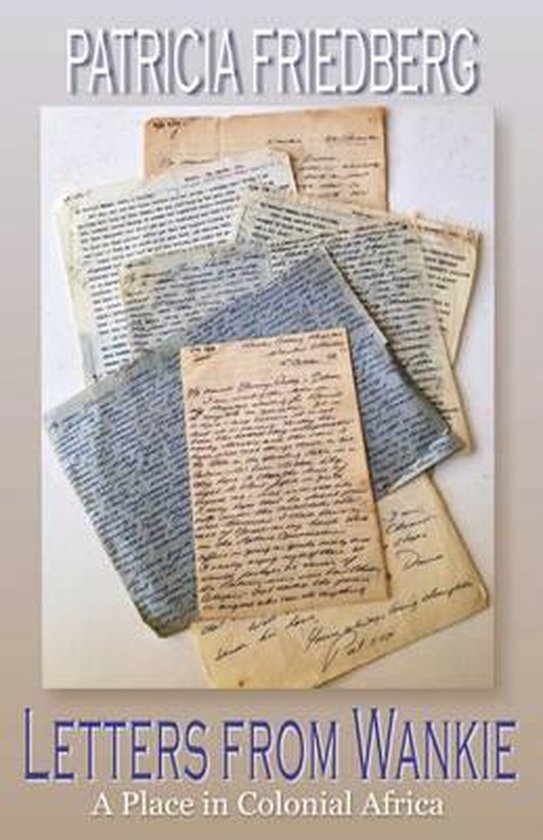 
Funny, Touching and a Bit of Wacky Wankie History


Letters from Wankie is a unique, true story based on the collection of some 500 air letters the author, British-born Patricia Friedberg, wrote home to England in the mid-1950s, during the first two years of her marriage to her South African physician husband.


After learning his promised position in Johannesburg had already been filled, the newlyweds moved to the remote mining town of Wankie in the far northwest corner of Southern Rhodesia (now Zimbabwe) where he was employed as a colliery doctor.


More than 50 years later, after her mother passed away, Patricia found among her mother's papers the bundle of air letters neatly tied and safely stored. Reading through the collection it was evident that the letters contained an incredible, historical account of life during the colonial years as seen through the eyes and writings of a young woman, twenty years of age, who was, unbelievably — even to herself — employed as Clerk of the Court at the Native Commissioner's Office.


Despite the enormous cultural differences the young Londoner faced — the challenging and often shocking tribal practices and Native law — she carried on, overcoming obstacles with spunk and grit and a saving sense of humor. Patricia Friedberg recognized the inequality on all levels between the races and early on predicted the subsequent outcome.


Praise for Letters from Wankie—


"A gorgeous, touching, tragic tale of a lost — but now, thanks to Patricia Friedberg — never forgotten time in a remote corner of colonial Africa." —Douglas Rogers, New York Times journalist and author of The Last Resort: A Memoir of Zimbabwe


"Patricia Friedberg's Letters from Wankie, her memoir of starting married life in colonial Rhodesia with her newly minted doctor husband, is a delightful account of a plucky young woman who takes things as they come and makes the best of them. She effectively uses the device of letters to home to set up her story. Then, for her readers, she fills in the backstory she didn't want her parents to know.


"Patricia's "voice' made me smile all through her account of life in Wankie, which one of the book's characters calls "the hell hole of Rhodesia.' As she ponders spending two years there she asks herself: Why on earth hadn't I asked a few questions beforehand? Like do we have a house with a proper roof? Or . . . Was there a psychiatrist or a marriage counselor I could speak with, if need be?


"Her descriptions of her job at the Native Affairs Department are priceless (and certainly accurate). Each day she is called on to work with the local tribesmen who arrive inside her office with whole families, including their livestock: "I raced to retrieve the recently signed copy of the European marriage certificate from the mouth of an oversized Billy goat. The cow wouldn't stop mooing, her udders just about reaching the ground. Will someone please milk that cow?'


"Reading Letters from Wankie is like listening to a charming tale told by a good friend — and, throughout the book, Friedberg exhibits the knack of making you feel she's a friend you have known forever.
"Well done!" —Georgia Court, owner, Bookstore 1 Sarasota


��What an adventure! I loved this book! I could not stop reading this honestly portrayed, exhilarating account of Patricia Friedberg's journey into the interior of Africa in the fifties. Filled with humour and astute wry observations, this is a delightful trip into the past where a newly married and naive British woman is taken by her new husband to live in a town in the middle of Africa, where elephants stop trains from running, where insects and lizards outnumber their human cohabitants, where baboon tails are collected for money. No sooner than she arrives in this desolate and isolated mining town with the dubious name of Wankie, she is given the job of "Clerk of the Court,' having to administer and preside over cases of theft, infidelity, marriage and injustice.


"The letters, documents and photos interspersed throughout the book reveal it to be a valuable slice of history that documents an era now washed away, an insight into a country which was once the jewel of Africa, and now is in ruins." —Paul Williams, Ph.D., author of Soldier Blue


"Letters from Wankie, by Patricia Friedberg, is a spell-binding memoir about herself as a twenty-year-old bride in 1954, who leaves her loving Jewish family in London to move with her new, handsome doctor husband to his post in the tiny mining town of Wankie in Rhodesia, Africa. In her "home' — two connecting thatched huts with earth floors — she battles mosquitoes, snakes, lizards and the occasional bullfrog. She also confronts a changing cast of fascinating humans, both Europeans (whites) and Natives (blacks), who need her help as Clerk of the Court of the Native Commissioners Office, a job she landed because she could type.


"Based on letters the author sent to her parents during her two-year "tour,' the book is augmented with candid observations about why the future of Africa would eventually change: short-sightedness of colonialism; Europeans' inhuman treatment of Natives, who were their servants, a practice she hated; and the futile nature of most missionary efforts.


"Read it and cheer for a young, brave and honest twenty-year old who used her brain, heart and the "old British try,' to make a difference in Africa. Without computers!" —Joan Kufrin, author of Uncommon Women and Leo Burnett, Star-Reacher


"Letters from Wankie originated when a twenty-year-old bride took pen in hand. It was a stroke of good fortune that her mum retained the letters she wrote. The information provided is not the same old, same old. Now apply the finely honed writing skills of a mature Patricia Friedberg to the business of writing this memoir, and you can't miss. Ms. Friedberg peppers her recollections with mental scenery that is thought-provoking, instructs and entertains. Exceedingly well done and a pleasure to read." —Marilyn Pincus, bestselling author, ghostwriter and member of the Authors Guild, New York, NY


About the Author, Patricia Friedberg—


Patricia Friedberg was born in London, attended The Henrietta Barnett School and continued her studies at The London School of Journalism. She married a South African doctor, who was furthering his studies in London, and they left for Southern Africa, living for ten years in what was then The Rhodesias, both North and South, first in Wankie (renamed Hwange) and later in Salisbury (renamed Harare after independence), Zimbabwe.


While living in Wankie, Rhodesia she worked as Clerk of the Court in the Office of the Native Commissioner, dealing with tribal and European law, before moving to live in the city of Salisbury (Harare) in Rhodesia, where she joined the newly formed TV station RTV (Rhodesian Television). Her experiences in Hwange allowed her to travel freely into the bush, taking along a photographer. From those interviews she produced a number of Tribal Documentaries and wrote articles to the Rhodesian Herald.


Political unrest intensified in Rhodesia, and, for the safety of their children, the family reluctantly left to settle in the U.S. -- first in Baltimore and then in Milwaukee. In the years that followed, she travelled extensively with her husband, then a professor of cardiology, to major cities in Europe, Asia, South America and Africa.


Patricia attended a playwriting course at Marquette University where her first play, "Masquerade," won the play writer's award. She collaborated on a series of children's books, titled The Alfred Stories, adventures taken from her reminiscences of her own childhood in London during World War II. In keeping with that theme she composed the story and music for a musical, "Twenty-One Aldgate."


As Moderator at NBC affiliate WMTJ-TV Milwaukee's ''People of the Book,'' she interviewed major celebrities, politicians, including the Israeli ambassador, UN Representatives and various personalities in Art and Music.


After moving to Florida she wrote the film script for her book Journey from the Jacarandas, a feature film begun in Zimbabwe but interrupted and unfinished due to civil disobedience and government sanctions.
Children's books, titled Dear Sammie and Dear Jake: a letter from a grandparent to a child of divorcing parents, were co-authored with her daughter Adrienne Meloni. The novel 21 Aldgate by Patricia Friedberg (Rainbow Books, Inc., 2010) was released in both the US and the UK. It is now available in softcover and ebook. The book has been optioned by Progress Pictures, Ltd., UK.