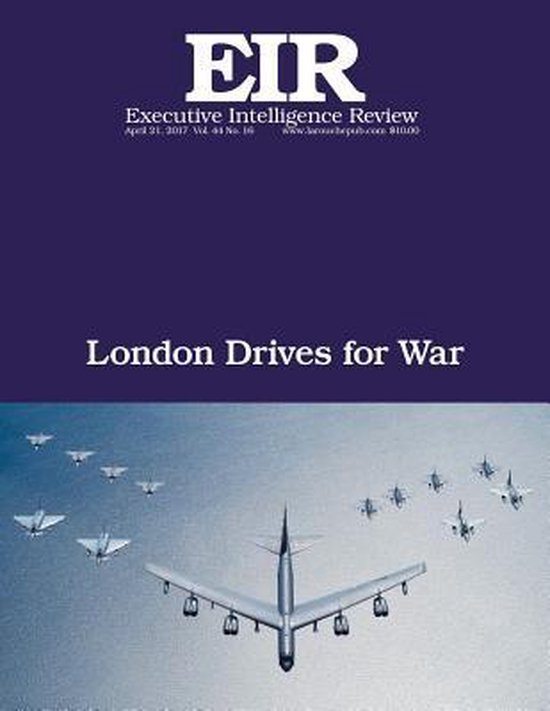 April 14—In the face of an ongoing deluge of lies and disinformation about Russia, coming from the institutions of the British Empire and its pathetic mouthpieces, there are two points of emphasis which must not be forgotten: first, that the City of London and Wall Street, the centers of power of the Empire, are hopelessly bankrupt, and are willing to risk thermonuclear war to maintain their global dominance; and second, that the great fear of those running the collapsing empire comes from the emergence of a New Paradigm, which rejects their geopolitical manipulations, and is based instead on cooperation between the United States, on the one side, and Russia and China on the other. The potential for realizing this New Paradigm has increased since the election of President Trump, with his promise to reverse the policy of regime change wars launched by his predecessors, Bush and Obama. It is this potential which has been the target of the British-directed campaign against Trump, in first accusing him of being a de facto agent under the control of Putin, and then delivering fake intelligence to him, which convinced him to order a cruise missile strike against the Shayrat air base in Syria. These two points were highlighted in an exchange between British UN Ambassador Matthew Rycroft, and Russia’s Acting Ambassador Vladimir Safronkov, during the United Nations Security Council debate on April 12, on yet another British sponsored resolution condemning the Assad government in Syria. Rycroft launched a vitriolic diatribe against Russia, blaming Russia for the deaths of Syrian civilians from chemical weapons, due to its continued support for Assad. Safronkov responded sharply: “What you are afraid of is that we [Russia] might work with the United States. That’s what you lose sleep over.” He continued, saying the United Kingdom is more focused on regime change than in aiding the Syrian people, and instead “invite illegal armed groups to London.” The latter point is a clear reference to British support for groups such as the “White Helmets,” a phony aid group infiltrated by jihadists terrorists, which was the main source for the allegations that it was Assad’s forces which used chemical weapons which killed civilians in Khan Shaykhun. In his denunciation of the Queen’s representative at the UN, Safronkov correctly identified the British as the instigator of the crisis that put the world on the edge of nuclear war. In doing so, he echoed U.S. statesman Lyndon LaRouche who warned U.S. President Trump that he must break out of the trap set by the British, by meeting immediately with Russian President Putin to reverse the march toward war. LaRouche reminded Trump that the British have been the enemy of this nation since its beginnings, and have repeatedly engaged in efforts to sabotage the American System of economics, which Trump has been championing. “The British Empire has been the enemy of mankind for a long time,” LaRouche said, “Shut down the British System! The U.S. is a nation—always has been a nation... so we must not submit.” He added that Trump must clean out the nest of British advocates of confrontation with Russia who are responsible for pushing the false reports of Assad’s responsibility for using chemical weapons. But, above all, he must meet with Putin as soon as possible.
Toon meer Toon minder