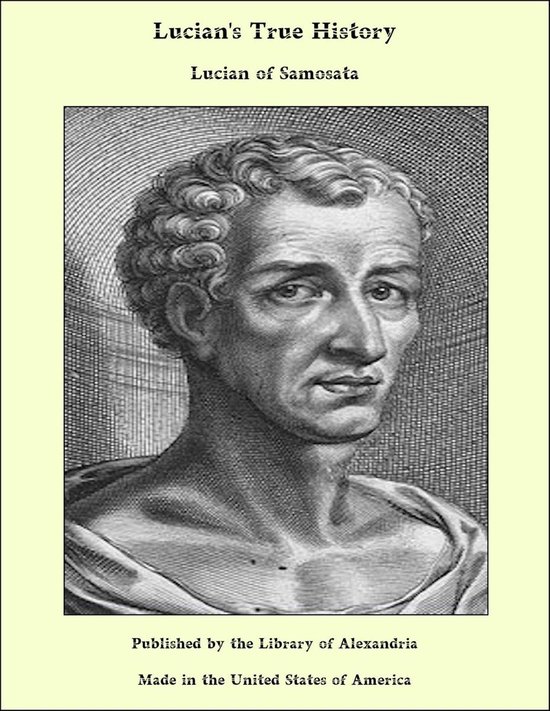 It is a commonplace of criticism that Lucian was the first of the moderns, but in truth he is near to our time because of all the ancients he is nearest to his own. With Petronius he shared the discovery that there is material for literature in the debased and various life of every day—that to the seeing eye the individual is more wonderful in colour and complexity than the severely simple abstraction of the poets. He replaced the tradition, respected of his fathers, by an observation more vivid and less pedantic than the note-book of the naturalist. He set the world in the dry light of truth, and since the vanity of mankind is a constant factor throughout the ages, there is scarce a page of Lucian's writing that wears the faded air of antiquity. His personages are as familiar to-day as they were in the second century, because, with his pitiless determination to unravel the tangled skein of human folly, he never blinded his vision to their true qualities. And the multiplicity of his interest is as fresh as his penetration. Nothing came amiss to his eager curiosity. For the first time in the history of literature (with the doubtful exception of Cicero) we encounter a writer whose ceaseless activity includes the world. While others had declared themselves poets, historians, philosophers, Lucian comes forth as a man of letters. Had he lived to-day, he would have edited a newspaper, written leading articles, and kept his name ever before the public in the magazines. For he possessed the qualities, if he avoided the defects, of the journalist. His phrase had not been worn by constant use to imbecility; his sentences were not marred by the association of commonness; his style was still his own and fit for the expression of a personal view. But he noted such types and incidents as make an immediate, if perennial, appeal, and to study him is to be convinced that literature and journalism are not necessarily divorced. The profession was new, and with the joy of the innovator Lucian was never tired of inventing new genres. Romance, criticism, satire—he mastered them all. In Toxaris and The Ass he proves with what delicacy and restraint he could handle the story. His ill-omened apprenticeship to a sculptor gave him that taste and feeling for art which he turned to so admirable an account. He was, in fact, the first of the art-critics, and he pursued the craft with an easy unconsciousness of the heritage he bequeathed to the world. True, he is silent concerning the technical practice of the Greeks; true, he leaves us in profound ignorance of the art of Zeuxis, whose secrets he might have revealed, had he been less a man of letters. But he found in painting and sculpture an opportunity for elegance of phrase, and we would forgive a thousand shortcomings for such inspirations of beauty as the smile of Sosandra: to τ μειδίαμα σεμνν κα λεληθς. In literary criticism he was on surer ground, and here also he leaves the past behind. His knowledge of Greek poetry was profound; Homer he had by heart; and on every page he proves his sympathies by covert allusion or precise quotation. His treatise concerning the Writing of History preserves its force irresistible after seventeen centuries, nor has the wisdom of the ages impeached or modified this lucid argument. With a modest wit he compares himself to Diogenes, who, when he saw his fellow-citizens busied with the preparations of war, gathered his skirts about him and fell to rolling his tub up and down. So Lucian, unambitious of writing history, sheltered himself from ''the waves and the smoke,'' and was content to provide others with the best of good counsel. Yet such is the irony of accident that, as Lucian's criticism has outlived the masterpieces of Zeuxis, so the historians have snatched an immortality from his censure; and let it be remembered for his glory that he used Thucydides as a scourge wherewith to beat impostors. But matters of so high import did not always engross his humour, and in The Illiterate Book-buyer he satirizes a fashion of the hour and of all time with a courage and brutality which tear the heart out of truth. How intimately does he realize his victim! And how familiar is this same victim in his modern shape!