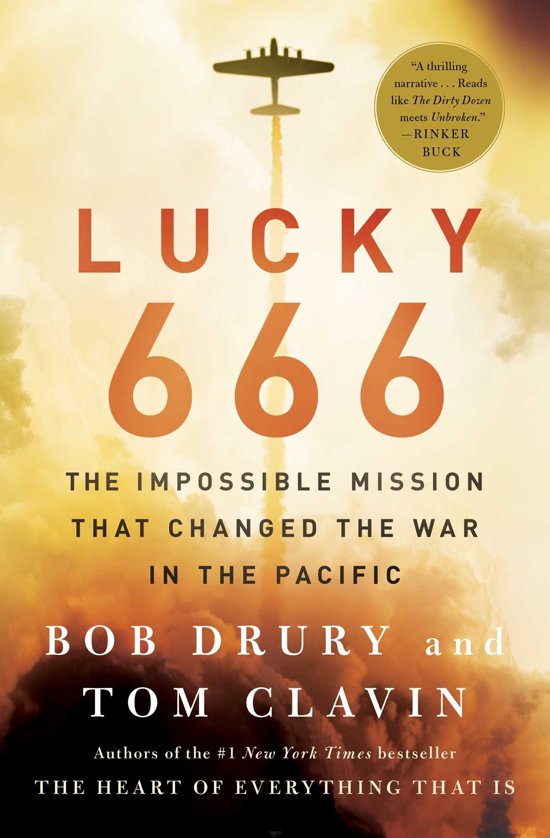 "A fast-paced, well-researched…irresistible" (USA TODAY) World War II aviation account of friendship, heroism, and sacrifice that reads like Unbroken meets The Dirty Dozen from the authors of the #1 New York Times bestselling The Heart of Everything That Is.


It's 1942, just after the blow to Pearl Harbor and the Japanese invasion of the Philippines, and the United States is reeling. A group of raw US Army Airmen travels to the embattled American Air Base of Port Moresby at Papua, New Guinea. Their mission: to protect Australia, to disrupt the Japanese supply lines, and to fly perilous reconnaissance runs over the enemy-held strongholds. Among the men are pilot Captain Jay Zeamer and bombardier Sergeant Raymond Joseph "Joe" Sarnoski, a pair of swashbuckling screw-ups whose antics prevent them from being assigned to a regular bombing crew. Instead, they rebuild a broken-down B-17 bomber from spare parts and christen the plane Old 666.


One day in June 1943, a request is circulated: volunteers are needed for a reconnaissance flight into the heart of the Japanese empire. Zeamer and Sarnoski see it as a shot at redemption and cobble together a crew and depart in Old 666 under cover of darkness. Five hours later, dozens of Japanese Zeros riddle the plane with bullets. Bloody and half-conscious, Zeamer and Sarnoski keep the plane in the air, winning what will go down as the longest dogfight in history and maneuvering an emergency landing in the jungle. Only one of them will make it home alive.


With unprecedented access to the Old 666 crew's family and letters, as well as newly released transcripts from the Imperial Air Force's official accounts of the battle, Lucky 666 is perhaps the last untold "great war story" (Kirkus Reviews) from the war in the Pacific. It's an unforgettable tale of friendship, bravery, and sacrifice—and "highly recommended for WWII and aviation history buffs alike" (BookPage).

Praise for The Heart of Everything That Is #1 NEW YORK TIMES BESTSELLER A SALON BEST BOOK OF THE YEAR TRUE WEST MAGAZINE'S BEST BIOGRAPHY OF THE YEAR A ripping yarn . . . A quintessentially Western tale of bold exploits, tough characters, brutal conditions and a lost way of life, this sounds like the sort of story that practically tells itself. Yet you only realize how little justice most popular histories do to their source material when you come across a book, like this one, that does everything right. It's customary to say of certain nonfiction books -- gussied up with plenty of 'color' and psychological speculation -- that they 'read like a novel, ' but truth be told, most of the time we'd have to be talking about a pretty mediocre novel. The Heart of Everything That Is, on the other hand, resembles the good ones. There were times, turning its pages, when I could almost smell the pines of the Black Hills, feel the icy wind tearing down from Canada across the prairie and hear the hooves of the buffalo pounding the earth. --Laura Miller, Salon Exquisitely told . . . Remarkably detailed . . . The story of Red Cloud's unusual guile and strategic genius makes the better-known Sitting Bull and Crazy Horse pale in comparison. . . . This is no knee-jerk history about how the West was won, or how the West was lost. This historical chronicle is unabashed, unbiased and disturbingly honest, leaving no razor-sharp arrowhead unturned, no rifle trigger unpulled. . . . A compelling and fiery narrative. --USA Today Vivid . . . Lively . . . A tale of lies, trickery, and brutal slaughter . . . In telling the story of Red Cloud, Messrs. Drury and Clavin appropriately bring a number of the larger-than-life figures from that time onstage . . . [and] chronicle in considerable detail the shameful treatment of the Indians across the plains and the destruction of their ancient way of life. --Christopher Corbett, The Wall Street Journal A page turner . . . Drawing on archives, letters, and a long-lost autobiography written toward the end of Red Cloud's life, the narrative has a remarkable immediacy . . . [and] the narrative sweep of a great Western. --Kate Tuttle, The Boston Globe Valuable . . . Meticulous . . . [A] remarkable story . . . The writers don't shy away from the atrocities on both sides of the gruesome, long-running conflict between the Indians and the U.S. forces. But when, for the umpteenth time, U.S. officials break a contract as soon as the glint of gold is spotted in the hills, one cannot help but feel that there's all the more reason to celebrate one of the Sioux's most impressive fighters. --Smithsonian The authors paint a full and vivid picture of the Oglala Sioux leader . . . The story of Red Cloud is presented here with all the tension and excitement of a good Western novel. . . . The narrative is gripping but not sentimental, and it is well-sourced, drawing, for example, on Red Cloud's autobiography, lost for nearly a century, and the papers of many others who knew Red Cloud's War. --Minneapolis Star Tribune We think of World War II aviation as a supremely bureaucratized, controlled effort of men and planes. But here is a tale of bomber pilots--maybe the last untold story of that great war--that instead involved individual initiative and extraordinary courage. Lucky 666 is a thrilling narrative about the ingenuity that it took to win the war, about a 'Gang That Couldn't Shoot Straight' of aviators who built their own B-17 out of junkyard parts, and then went on to fly one of the most memorable, effective missions of the Pacific campaign. The result is a book that reads like The Dirty Dozen meets Unbroken. I particularly admire the gritty details here about WWII aviation. Superb! --Rinker Buck, author of The Oregon Trail and Flight of Passage An entertaining popular history that will appeal to fans of adventure-style World War II stories. --Library Journal A vivid slice of war history that WWII buffs and anyone who admires true acts of heroism will find riveting. --Booklist In June 1943, Zeamer and Sarnoski volunteered for the heartbreaking 'impossible mission' that forms the core of this remarkable account of friendship and bravery. Authors Bob Drury and Tom Clavin not only tell the inspiring story of these two young airmen, they also provide a cogent, absorbing analysis of the air war in the Pacific. Lucky 666 is highly recommended for WWII and aviation history buffs alike. --BookPage The authors deliver a great war story. --Kirkus Reviews A fast-paced, well-researched account of a B-17 bomber--known as Old 666--its crew, and a courageous flight . . . Drury and Clavin skillfully blend Old 666's flight into the larger picture of Pacific Theater warfare and give gripping accounts of combat flights. The result is a story that history aficionados will find irresistible. --USA Today
Toon meer Toon minder