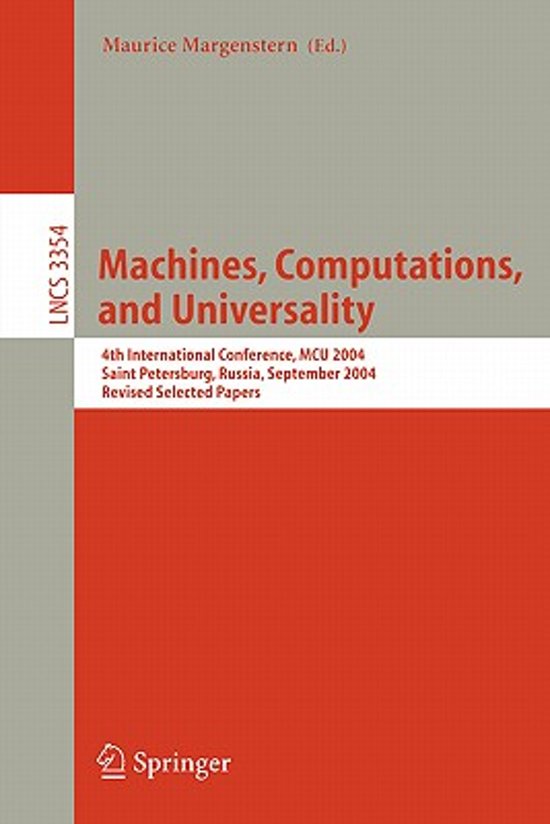 In this volume, the reader will ?rst?nd the invited talks givenatthe conference. Then, in a second part, he/she will ?nd the contributions which were presented attheconferenceafterselection.Inbothcases,papersaregiveninthealphabetic order of the authors. MCU 2004 was the fourth edition of the conference in theoretical computer science,Machines, Computations and Universality,formerly,Machines etcalculs universels. The ?rst and the second editions, MCU 1995 and MCU 1998, were organized by Maurice Margenstern, respectively in Paris and in Metz (France). The third edition, MCU 2001, was the ?rst one to be organized outside France and it was held in Chi, sin? au (Moldova). Its co-organizers were Maurice Marg- sternandYuriiRogozhin.TheproceedingsofMCU2001werethe?rstto appear in Lecture Notes in Computer Science, see LNCS 2055. From its very beginning, the MCU conference has been an international s- enti?c event. For the fourth edition, Saint Petersburg was chosen to hold the meeting. The success of the meeting con?rmed that the choice was appropriate. MCU 2004 also aimed at high scienti?c standards. We hope that this v- ume will convince the reader that this tradition of the previous conferences was also upheld by this one. Cellular automata and molecular computing are well represented in this volume. And this is the case for quantum computing, formal languages and the theory of automata too. MCU 2004 also did not fail its tra- tion to provide our community with important results on Turing machines. Also a new feature of the Saint Petersburg edition was the contributions on analog models and the presence of unconventional models.
Toon meer Toon minder