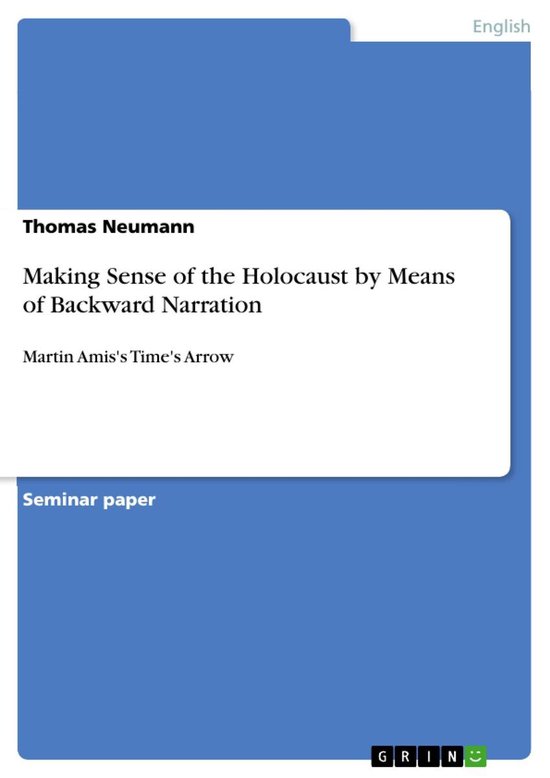 Seminar paper from the year 2007 in the subject English Language and Literature Studies - Literature, grade: 1,0, University of Augsburg, course: Literature and the Holocaust, 12 entries in the bibliography, language: English, abstract: The problem of finding appropriate ways to represent the Holocaust has been haunting Holocaust literature ever since Theodor Adorno's famous dictum that there cannot be any poetry after Auschwitz. In fact, the uniqueness of the Holocaust raises serious ethical questions whether there can be any appropriate representation of these atrocious events at all. As the horror of Auschwitz goes beyond human imagination, the problem boils down to the one question: How can you imagine the unimaginable? Martin Amis's novel Time's Arrow or the Nature of the Offence (1991) has a rather bold answer to this question: by narrating it backwards. In the novel, the story of the Nazi doctor Odilo Unverdorben is narrated vice versa, following his life from end to start through the eyes of a ghostlike narrator who emerges at the point of his death. As the technique of backward narration distinguishes Time's Arrow from almost any other Holocaust fiction, in the following my focus will be on the novel's use of narrative reversal to represent the Holocaust. I will argue that the technique of backward narration offers a way to make sense of the Holocaust and Nazism in general, thereby showing that the novel's form and content are inseparably linked. In order to do this, I will first go over some of the negative criticism that Time's Arrow was exposed to, focusing on the problem of form and content. I will then show how backward narration offers a solution to specific problems in Holocaust literature and how it helps to avoid the danger of aestheticising Auschwitz. After that, I will point out that backward narration can help to understand the Holocaust, exploring the connections between Nazism and the temporal and moral reversal effected by narrative reversal. Finally I will examine the influence of Robert Jay Lifton's The Nazi Doctors on Time's Arrow. By applying Lifton's theory of psychological doubling to the novel, the close connections between form and content will once again be highlighted.
Toon meer Toon minder