Making Them Indonesians Child Transfers Out of East Timor 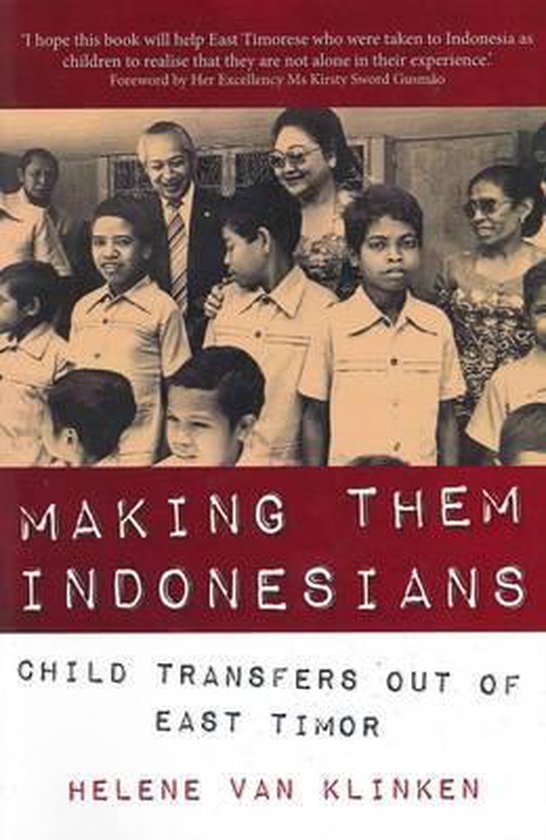 ''One Indonesian soldier was particularly nice to me. He gave me pretty clothes and sweets and used to take me for walks and to his office. Then one Sunday, it was just after my first communion, I was coming out of church with other children when soldiers took me and put me into a vehicle. My uncle tried to stop them. I remember screaming and being very frightened. They took me to the nearby airfield and then in a helicopter. As we took off I threw the handkerchief my uncle had given me out of the helicopter.'' - Biliki, in Jakarta 2003, recalling her last recollections of her life in East Timor as a seven-year-old child in 1978 *** Biliki was one of approximately 4,000 dependent East Timorese children who were transferred to Indonesia during the occupation of East Timor by Indonesia between 1975 and 1999. Many, like Biliki, were taken by soldiers to be adopted, while others were sent to institutions in Indonesia by government and religious organizations. This book is the first detailed account of the history of the transfer of these children to Indonesia. It is not a simple story, nor can it be depicted in black and white terms. Some children were taken against their wishes, while others were rescued from certain death. Some parents were coerced and deceived into giving their children away, while others agreed to the transfer of their children because of the critical situation due to the war. Some children were treated like family members by those who took them, while other children had to work for their adoptive families, sometimes in slave-like conditions. The motivation of those who transferred the children ranged from genuine compassion and good intentions to the less benevolent manipulation and use of vulnerable children for economic, political, and ideological ends. These child transfers are a window on the relationship between Indonesia and East Timor during this period. It had many of the marks of a colonial relationship, and, like all such relationships, was full of ambiguities and contradictions. The underlying aim of the Indonesians was to integrate the East Timorese children and make them Indonesians. (Series: Monash Asia)
Toon meer Toon minder