Mary, Mary Quite Contrary Second Edition Does The Lord Jesus Want Women To Rule As Elders In His Church ? 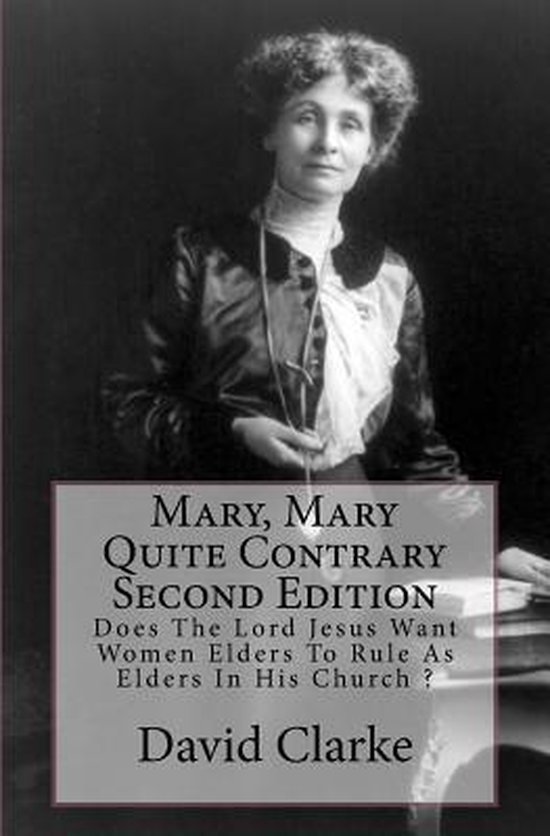 When treating the subject of women elders in the church we are not dealing with the affairs of a secular society and so it has nothing to do with womens rights, equality of sex or race in the world. This matter only relates to men and women in a Christian church. It is about the rules of the house of God, which is the church of the living God and rules for those who are members of the body of Christ and members of an heavenly county. The Suffragettes Emmeline Pankhurst 1858 -1928) was a Suffragette and worked very hard to bring equal rights for women to vote as men. In the year of her death all women over 21 gained the right to vote. The Suffragette movement brought about many changes for the better in a secular society but not so for women seeking to follow Christian principles. One of her famous quotes was, Trust in God She shall provide. Terms which do not reflect Christian beliefs. We know God will provide and He is not a she. In the USA and the UK, women's political rights were brought into general political consciousness by the suffragettes and since then there have been legal rights granted to the Lesbian, gay, bisexual and transgender groups, same sex marriages, along with the development of the feminist movement and the appointment of persons from the LBGT community to responsible positions in the Church of England. All of this has caused conflict in the Christian community due to differences beliefs of right and wrong.This book seeks to show what the bible has to say about the role of women in the church and family. Since these rules are taught by the Apostles of Christ they are the word of God to us and we should obey. The secular world may differ and turn from the narrow path taught in scripture but we should follow the word of God, this is our wisdom.
Toon meer Toon minder