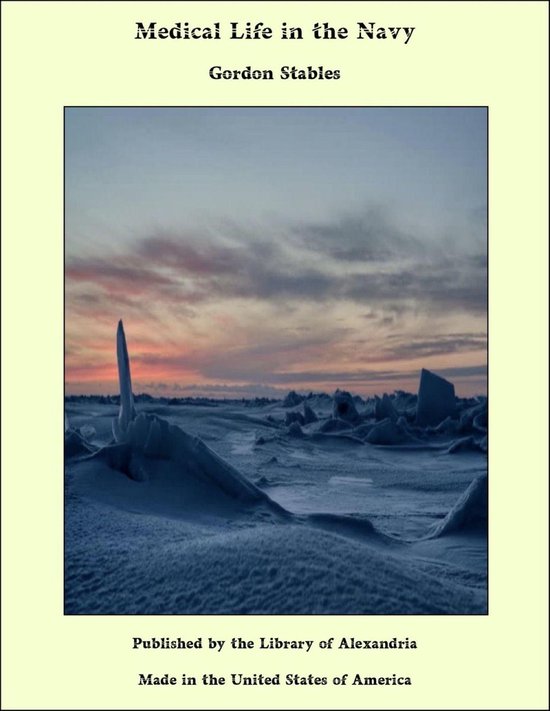 I chose the navy. I am not at all certain what it was that determined my choice; probably this—I have a mole on my left arm, which my gossiping old nurse (rest the old lady’s soul!) used to assert was a sure sign that I was born to be a rover. Then I had been several voyages to the Arctic regions, and therefore knew what a sea-life meant, and what it didn’t mean; that, no doubt, combined with an extensive acquaintance with the novels of Captain Marryat, had much to do with it. Be this as it may, I did choose that service, and have never yet repented doing so. Well, after a six weeks’ preparatory read-up I packed my traps, taking care not to forget my class-tickets—to prove the number of lectures attended each course—a certificate of age and another of virtue, my degree in surgery (M.Ch.), and my M.D. or medical degree; and with a stick in my hand, and a porter at my side, I set out for the nearest railway station. Previously, of course, I had bidden double adieus to all my friends, had a great many blessings hurled after me, and not a few old shoes; had kissed a whole family of pretty cousins, ingeniously commencing with the grandmother, although she happened to be as yellow as a withered dock-leaf, and wrinkled as a Malaga raisin; had composed innumerable verses, and burned them as soon as written. “Ticket for London, please,” said I, after giving a final wipe to my eyes with the cuff of my coat. “Four, two, six,” was the laconic reply from the Jack-in-the-box; and this I understood to mean 4 pounds 2 shillings 6 pence of the sterling money of the realm—for the young gentleman, like most of his class, talked as if he were merely a column in a ledger and had pound shilling penny written on his classic brow with indelible marking ink, an idea which railway directors ought to see carried out to prevent mistakes. I got on board the train, a porter banged-to the door so quickly that my coat-tails were embraced between the hinges; the guard said “all right,” though it wasn’t all right; the whistle shrieked, the engine puffed, the wheels went round with a groan and a grunt, and presently we were rattling over the bridge that spans the romantic Dee, with the white walls of the Granite City glimmering in the moonlight far behind us. After extricating my imprisoned garment, I leant over the window, and began to feel very dull and sentimental. I positively think I would have wept a little, had not the wind just then blown the smoke in my face, causing me to put up the window in disgust. I had a whole first-class compartment to myself, so I determined to make the best of it. Impressed with this idea, I exchanged my hat for a Glengarry, made a pillow of my rug, a blanket of my plaid, and laid me down to sleep—“perchance to dream.” Being rather melancholy, I endeavoured to lull myself to slumber by humming such cheering airs as ‘Kathleen: Mavourneen,’ ‘Home, sweet home,’ etc—“a vera judeecious arrangement,” had it continued. Unfortunately for my peace of mind it did not; for, although the night train to London does not stop more than half-a-dozen times all the way, at the next station, and before my eyes had closed in sleep, the door of the compartment was opened, a lady was bundled in, the guard said “all right” again, though I could have sworn it wasn’t, and the train, like the leg of the wonderful merchant of Rotterdam, “got up and went on as before.”